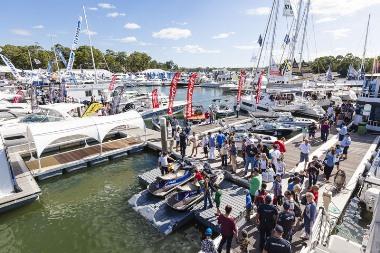 The organisers behind the weekend’s 25th anniversary Sanctuary Cove International Boat Show have declared the event a success, with visitors number up on last year’s and exhibitors said to be buoyed by returning confidence in the marine industry.

According to the organisers, figures show a total of 37, 571 visitors attended the four-day event which ran from May 23 to 26, a 1.29 per cent increase on last year’s overall numbers.

The biggest crowds flooded through the gates on Sunday, with 11,218 visitors enjoying the sunshine on the last day of the Show. This was also an eight per cent increase on last year’s Sunday visitors.

Showers and cooler temperatures failed to keep visitors away on the Friday of Boat Show. The Show’s second day recorded second biggest numbers with more than 8000 visitors through the gates.

SCIBS sales, events and sponsorship manager Johan Hasser said the team was happy with the turnout over the four-day event.

He said the general feedback from exhibitors was they were also pleased with the quality of visitors coming through.

“Most of our exhibitors were happy with the outcomes and the quality of the guests we had through the gates,” he said.

“Many have already made some good sales over the weekend and many more have strong leads that will hopefully convert to sales in the next couple of weeks or months.”

Hasser said the success of this year’s event was a sign confidence was returning to the marine industry and had cemented its popularity as a major event on the Gold Coast calendar.

He said the SCIBS dates had now been set for the next two years and in 2014, SCIBS will run from Thursday, May 22 to Sunday, May 25.

“Following on from the success of this year, we’re hoping that confidence will only continue to build,” said Hasser.

“We’re already looking forward to putting the plans in place for the 26th Show next year,” he added.

Millions of dollars in boating and marine equipment exchanged hands over the four days of Boat Show, with some of the biggest success stories including Gold Coast based Riviera, which reported $21 million in sales across its Boat Show events over the weekend.

A total of 327 exhibitors were on show this year, with 127 boats on water.

SCIBS 2013 was sponsored by Club Marine, Bentley Brisbane and Maserati Brisbane. In 2015, SCIBS will run from Thursday, May 21 to Sunday, May 24.