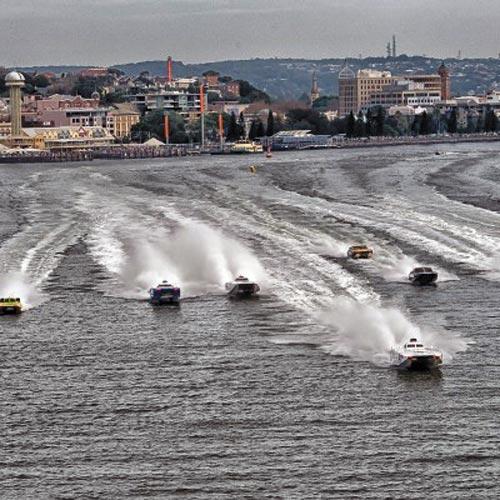 All things high-octane feature on land and on water in the Fuelarama Festival 2013 at Newcastle on April 27 and 28.

The foreshore spectacular, now into its fourth edition and last year attracting 40,000 spectators, includes the opening round of the 2013 Offshore Superboat Series, the Boat & Leisure Show, a variety of car/hot rod/4WD displays, food and market stalls, rides and amusements, and a diverse range of free activities for the whole family.

The Offshore Superboat Championships — described as V8 Supercars on water — open the season and at Fuelarama. Three classes of superboats, with up to 1000hp of V8 muscle and speeds up to 116kts, will contest Round 1 racing in and out of Newcastle Harbour.

First off though is the Salstrip Kilo Run on Saturday (April 27), where the superboats take a predetermined course in Newcastle Harbour trying to set not just Australian but also World speed records. Trials start at noon and finish at 4pm.

Traditionally a single one-hour race, Round 1 racing at Fuelarama will comprise two heats on Sunday. Watch the superboats craned into the water at 10am, with heat one starting at 11am and racing for 30 minutes. Heat two kicks off at 1pm and runs for 40 minutes.

All this can be seen from the foreshore of Newcastle Harbour, to the lighthouse and down the coast to Nobbys Beach. It can also be viewed from the water, so if you have a runabout, cruiser or sailboat get out and see these awesome vessels do their thing on Newcastle Harbour.

Newcastle Foreshore Park is the location of the Boat & Leisure Show, where a raft of boating brands including the latest in power, sail, multihull, trailer, ski, fishing, cruising and family boats, jetskis, inflatables and tinnies will be on display along with lifestyle products and services that reflect the marine and outdoors theme.