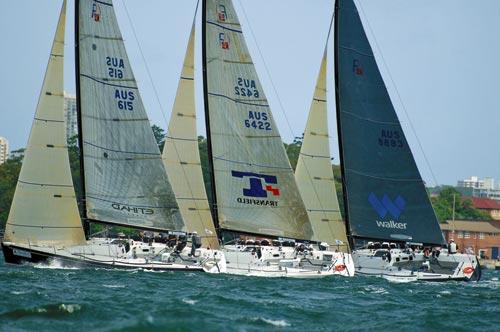 Transfusion won all three lead-up State titles and clinched the championship with victory in the nine-race national one-design regatta sailed over two days (February 24 and 25) on a blustery Sydney Harbour.

This is Belgiorno-Nettis’s fourth national title in the class, having also been crowned in 2009, 2010 and 2012, and in 2011 winning the Rolex Farr 40 World Championship in Sydney.

“We were progressively losing points in the first two races today so we thought we’d better pull up our socks, which we did in the seventh race, then the next two races we sailed ordinarily again,” said Belgiorno-Nettis after competing in the Calvert-Jones Trophy.

“We crossed the finish line thinking we’d lost to Kokomo; the three lead boats were so close at the finish line it was hard to see who was in front. It was right down to the wire; the tension on our boat was amazing,” he said.

Quick responses, crew handling and keeping the mast pointing towards the sky in the gusty NNE winds on a wild and woolly Sydney Harbour, were key ingredients on the final day of the John Calvert-Jones Trophy regatta to decide the Australian Farr 40 champion. Second by one point was Lang Walker’s Kokomo (25 points) and third overall and first Corinthian Farr 40 was Andrew Hunn and Lloyd Clark’s Voodoo Chile (26 points) from Tasmania.

Five races were completed in quick succession on the final day, two laps of the course set off Clarke Island, near Double Bay, per race. They were hard windward works to the top marks laid off Nielsen Park at Vaucluse and lots of crash gybing and kites flogging in the following breeze once the fleet turned the corner.

The remnants of the low-pressure system that wreaked havoc on Sydney that weekend continued to dictate conditions for the curtain closer, a strong wind warning, warm northeast breeze, declining sea state, high humidity and heavy cloud cover creating a surreal scene on a hazy and almost empty Sydney Harbour.

Teams strapped in for some hairy rides, the 10 Farr 40s throwing up plenty of wake running downwind at 18kts. The sprints didn’t end well for some including Ivan Resnekov’s iMpi. The crew was forced to cut through the spinnaker halyard to prevent the kite pulling them on to the rocks at Bradleys Head after a spectacular wipe-out laid the boat over in race six, and forced their retirement.

The weekend’s national one-design series was dedicated to the class’s forefather and the first Australian Farr 40 World Champion, John Calvert-Jones, who was on the water watching the final day of competition and later presenting the trophy to the winner.

“The key to this class is the quality around the world and the fact they haven’t been modified hugely because they are fundamentally well-designed and already so competitive,” said Calvert-Jones, who has been involved with the Farr 40s since their inception 16 years ago and last raced in 2005.

Sam Hill, owner/skipper of Forty has been instrumental in the uniting active Australian Farr 40 owners and putting together a hard-fought series in Brisbane, Hobart and finally Sydney where the NSW State titles led into the nationals, conducted by the Royal Sydney Yacht Squadron at Kirribilli.