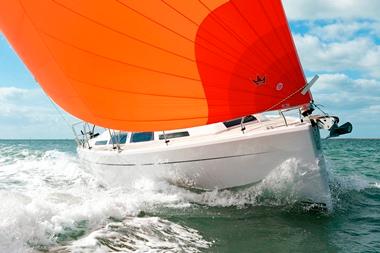 Yacht importers Team Windcraft will showcase the new Hanse 345 at the 2013 Sanctuary Cove International Boat Show in May.

The company, which has bases in Melbourne, Sydney and Queensland, will also use its appearance at SCIBS to float two “green” vessels from its innovative Eyachts stable.

Managing director Peter Hrones said the 345 had “the hallmark precision and quality of one of the world’s best yacht designers — Hanse.”

“For a 34-footer this yacht is efficient to the max and has Hanse’s trademark craft and styling,” he said.

Customisation options for the 345 include the choice of three floor woods, two galley work tops and upholstery colours and material. A new performance pack is also available including upgraded Elvstrom sails designed by Jesper Bank.

They include the award-winning Greenline Hybrid 33 — the first truly hybrid boat to utilise solar, diesel and electric power, according to Team Windcraft; and its successor, the Greenline Hybrid 40.

“The Greenline 33 is a multi-award winning yacht recognised across the globe as boat of the year in several countries.

“It has also received awards for its green technology and economic feasibility.”

The Hybrid 33 sleeps four with a twin or full-size bed option and a convertible lounge in the saloon. The bigger vessel offers stand-up head room in the master and guest cabin.