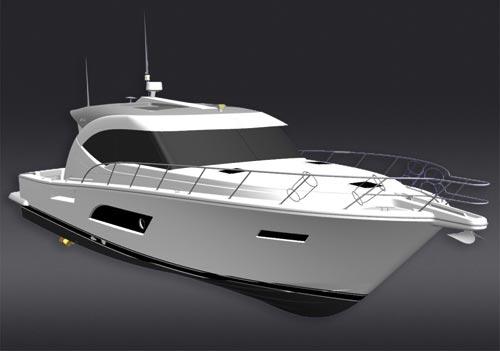 Riviera’s design team are putting the finishing touches on the second model in the new SUV express cruiser range, the 565 SUV, due for release in May at the 2013 Riviera Festival of Boating, coinciding with the Sanctuary Cove International Boat Show.

The boatbuilder said its first SUV, the 445, met with “immediate popularity” following its launch in August last year, with eight sold locally and internationally since.

We’re told the new 565 SUV bridges design cues borrowed from three other successful models: the high-performance blue-water cruising abilities of the Flybridge range, in particular the 53EF; the fishing functionality of the Offshore Express; and the single-level entertaining aspect of the Sport Yacht series.

Featuring three cabins and two bathrooms, the 565 SUV has flexible accommodation with sleeping for six to eight adults. The full-beam master suite boasts a king island bed, large hull windows and optional opening ports for cross ventilation, a walk-in robe, lounge, and 32in TV and DVD player as standard.

“The forward cabin has an optional layout with the choice of either a queen island bed or a triple-bunk arrangement as displayed on hull one,” says Riviera’s head of design Stephen Ford. “This cabin also features large hull windows and deck hatch for ventilation. The third cabin has 2m long bunks, making this vessel ideal for extended stays aboard with family or friends.”

The port helm station has room for three display screens, controls and the Volvo joystick. There are four helm chairs, two of which swivel 180 degrees to face the saloon. The saloon features an L-shaped lounge that drops to form a double berth, dining area to port and an aft galley.

A key design feature that sets this model apart, said Riviera, is the expansive, uncluttered cockpit with storage options including insulated fish bin, plus stowage inside the engineroom hatch. The mezzanine seating to port also has a cool box underneath.

With a 3500lt midships fuel tank, Riviera expects the 565 SUV to have a cruising range of 390nm from the twin Volvo Penta IPS 900s. Visit Riviera for more information.