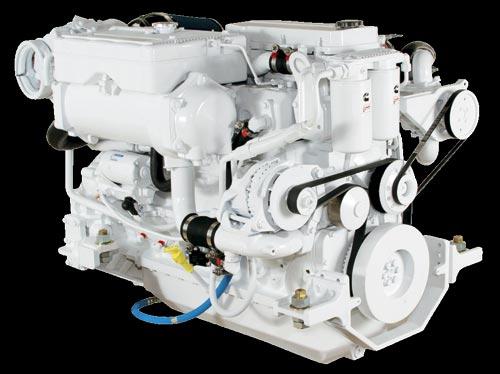 Cummins has released a new QSB6.7 diesel engine with increased power now offered at 550hp for the recreational marine market.

The company says that while meeting the USA’s EPA Tier 3 emissions regulations the QSB6.7 offers better performance and improved sociability and operations over its popular QSB5.9 model, without sacrificing fuel economy.

Cummins said its engineers reached Tier 3 levels by improving the efficiency of combustion.

The QSB6.7 is also said to provide more torque for better acceleration and maintaining speed through turns.

Cummins claims a pair of 480hp QSB5.9 engines linked to Zeus pods installed in a 44-foot express cruiser accelerated the test boat to 17.4kts (20mph) in 14 seconds, while the same boat powered by 480hp QSB6.7s accelerated to that speed in just 8 seconds, with little change to fuel economy.

The QSB6.7 also employs a new fuel calibration strategy for optimal fuel economy at cruising speeds, where the engine is most often used, rather than at wide-open throttle.

Among improvements is an air-filter temperature sensor for engine use in extreme environments, and the standard fuel system made compatible with low-lubricity fuels.

The QSB6.7 is available from 230 to 550hp for inboard and Zeus pod-drive applications. QUICK SPECS