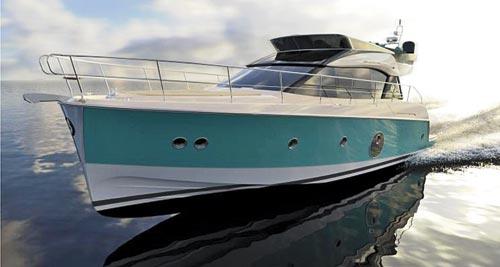 The Beneteau Group and its Italian luxury yard Monte Carlo Yachts (MCY) will display the first of a new sub-60-foot flybridge range, the MC5, in an Australian show debut at Sydney 2014.

Launched at the Dusseldorf Boat Show in January 2013, the MC5 is immediately distinguishable from her bigger sisters flaunting a wave-cutter hull. A collaboration between naval architects Tanguy Le Bihan and Patrick Tableau and design firm Nuvolari & Lenard, the hull’s high-profile bow has been specifically designed to cut through the waves in all sea conditions. MCY says perfect seakeeping is maintained and output improved by eight per cent in relation to a traditional hull.

The 50-foot MC5 otherwise retains the Nuvolari & Lenard DNA of the MCY fleet; the spacious flybridge as well as the refinement of the saloon said to be distinctive features of the marque’s style. MCY adds that the full-width master cabin boasts panoramic windows and fine textiles, as do the VIP and guest cabins.

The MC5 is also specifically designed for Volvo Penta IPS pod-drives offering a choice between the IPS 500 and 600, the latter’s larger engines pushing the boat to more than 30kts.