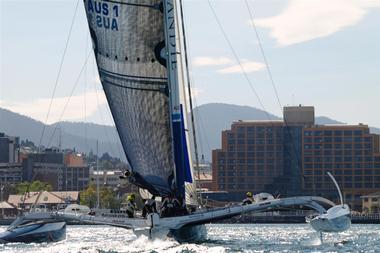 last week broke the Sydney to Hobart fastest time by more than 12 hours.

Ahead of a 12-15 knot north-easterly breeze, Team Australia coasted past the Castray Esplanade finish box, recording an unofficial finish time of 16:51:20 or 4.51pm. This time will be verified by the recording device installed on the boat by World Sailing Speed Record Council representative John Brooks.

Thee crew’s start time from between North Head and the Hornby Lighthouse on South Head was 10:58:57 Friday morning, and average speed for the 630 nautical mile stretch was 21kts.

After arriving, an exhausted Sean Langman said his crew never took their wet-weather gear or lifejackets off. “We were always on the edge, that’s what sailing these boats is like,” he said. “We’ll have another go when someone else breaks ours.”

After an hour’s sleep broken up into two “cat naps” he was understandably drained as he spoke to Hobart media and well-wishers who have been following the trimaran’s progress via satellite tracking.

While Bob Oatley’s 100ft supermaxi Wild Oats XI will remain the Sydney Hobart yacht race record holder, with a time of 42 hours, 23 minutes and 12 seconds, the ORMA 60 trimaran Team Australia will be added to the WSSRC’s list of sanctioned passage records.

After a shaky start in the angry backwash off the cliffs at South Head, the seven crew, including skipper Sean Langman, son Peter Langman, Larry Jamieson, Shaun McKnight, James Ogilvie, Aaron Hampo and Josh Alexander, rode the strong nor’easter across Bass Strait to arrive waterlogged into Hobart on a sunny summer’s afternoon.

With the passage record comfortably clinched, Team Australia’s new target as the neared the Apple Island was to finish in less than 30 hours — they scraped in by just seven and a half minutes.

The optimal weather window was no fluke, Langman and Alexander worked closely with world renowned marine forecaster, Roger “Clouds” Badham, in the lead-up to the attempt to hand pick the start time.

As well as optimum winds and sea state, timing the run ahead of the whale migration north and the possibility of hitting a giant humpback and causing major damage was a priority.

Langman’s greatest worry was hitting a submerged object or marine life at breakneck speed. In the end all they broke was one mainsail car, a small and relatively insignificant piece of plastic and a surprising outcome given the extreme sustained loads on the boat and gear.

The multihull’s top speed was recorded at 39.6kts.