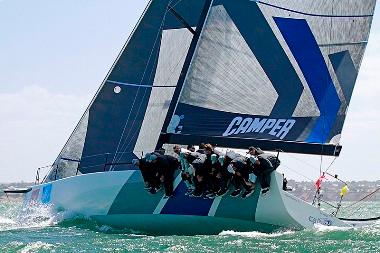 The first of a new three-part class racing yacht series, the Australian TP52 Southern Cross Cup, will be held this weekend on Port Phillip, Victoria.

From Friday, February 8 to Sunday, February 10, eight TP52-class owners from Tasmania to as far away as Hong Kong will come together for the first series skirmish off the host club, Sandringham Yacht Club (SYC).

Eight races over three days will mark the inaugural Australian class series. The format will be windward/leeward racing close to SYC to allow beachgoers and spectators to witness what are said to be high-performance 52-footers up close.

Jason Van Der Slot, co-owner of Calm and owner of Calm 2, along with Sydney-based Terry Wetton, crewman on Hooligan, have been instrumental in bringing the first event of the TP series alive.

“This series is about the owners getting together in like-for-like boats and running a series to raise the profile of the class and show other boats owners how dynamic the TPs are,” said Van Der Slot. “No matter what age TP you have or what level of crew you have, there is room for all in the class.”

The age of the boats racing this weekend range from 2004 to those launched in 2011 so an age allowance will be applied to create a more level playing field for the earlier generation boats. Each hull launched has been an improvement on the last, and according to the event organisers the newer models are cutting-edge technically and blisteringly fast.

The grand prix class has traditionally attracted Olympians, America’s Cup and round the world sailors, and the Australian class is no different. A bevy of well-known international yachtsmen including Billy Merrington and New Zealand whizzes Stu Bannatyne and Gavin Brady, all with America’s Cup credentials, will join this weekend’s crew line-up.

The event this weekend follows Geelong’s Festival of Sails and Audi IRC Australian Championship a fortnight ago. The timing is said to be deliberate to give owners, particularly from interstate, who contested that championship a short window before re-hoisting sails.

A limit of 12 crew plus a cap on the number of pros on each TP has been set for this weekend’s inaugural Australian class showdown. Like the America’s Cup and other commercially minded classes, each may be required to carry a guest such as a sponsor or owner’s invited guest so there’s more engagement with the public and corporates.

Racing is due to get underway at midday each. Results will be posted here each afternoon so check back regularly.