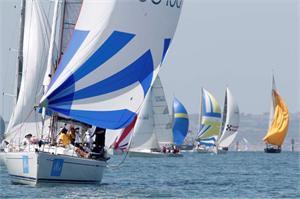 The Festival of Sails is Victoria’s oldest sporting trophy. This year’s 170th edition is said to have attracted more than 300 entries and near to 3000 sailors from every Australian state and territory.

This year the sailing component of the Festival has been broken into two stages:

• The grand prix series — the 2013 Audi IRC Australian Championship — will open the Festival and keep the IRC division at Geelong for the duration of their four-day battle, from Thursday, January 24 to Sunday, January 27.

• Sports boats including the Melges 24s and 32s and SB20s, plus the A-Class catamarans will also commence their series on Thursday at Geelong.

• The passage race on Friday will open proceedings for the bulk of participants, followed by two days’ racing on Corio Bay over the Australia Day long weekend.

Racing for all divisions other than the International Cadets will finish on the Sunday afternoon. Monday, January 28, marks the trophy presentation and Festival close.

A shoreside family program of entertainment and activities, which the organisers say brings 100,000 people to Geelong’s waterfront.