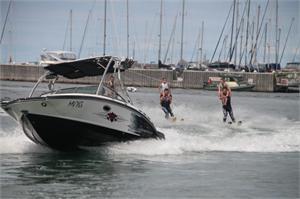 Chaparral Boats says it will present twice-daily waterski and stunt shows at the Festival of Sails over the Australia Day Weekend, on Victorian’s Geelong Waterfront.

The Chaparral Water Ski and Stunt Show is made up of skiers of aged 10 to 50 years and includes members who have represented Australia in international ski shows and competitions. Chaparral says the team counts among it the world number two show skier, the current Australian male and female wakeboard champions, and several other past world and Australian champions.

Towed by Chaparral’s sportsboats, the performances are said to include spectacular stunts that have wowed crowds around the world, including the opening of the Olympic Games in Seoul and the Sea World ski show on the Gold Coast. The finale will see a barefoot skier leap from a helicopter and ski away.

Scott O’Hare from Chaparral Australia said: “We are excited that we can bring this world-class ski show to Geelong to celebrate Australia Day in style.

“We know that the crowds will enjoy the performances and we look forward to demonstrating just how well our wake and skiboats perform, particularly when it counts, in front of a big crowd with professionals relying on our boats,” he said.

Chaparral will also have boats on display in the Club Marine Boating & Lifestyle Exhibition area of Fairnie Park during the Festival.

According to the organisers, the Chaparral Water Ski and Stunt Show performances are best viewed from the festival site between Cunningham Pier and the Royal Geelong Yacht Club on the Geelong waterfront.

Chaparral is one of the world’s biggest boatbuilders with a lineup of 29 sportsboats ranging from 18 to 42ft, from entry-level bowriders to high-end motoryachts.