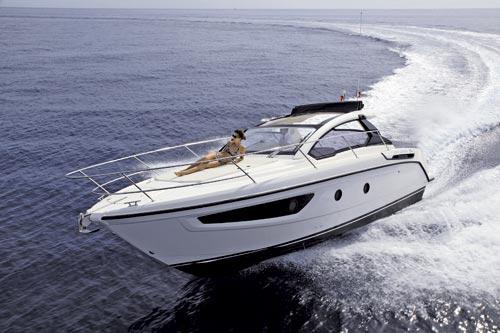 Italy’s Atlantis Yachts, the Azimut Benetti Group’s luxury sportscruiser brand, has completed its five-model line-up with the launch in Europe of the under-10m entry-level Atlantis 34.

Powered by two 220hp Volvo Penta D3 engines with Duoprop sterndrives, the Atlantis 34 has a claimed top speed up to 32kts and a cruise of 29kts. There are four berths via a double cabin amidships and a convertible dinette.

The builder said the Atlantis 34 is a completely new composition from Neo Design and its own in-house design team, incorporating the distinctive style and features of the larger models in the fleet, with engineering by Seaway.

Atlantis Yachts is targeting the medium/small sector of the European market with a hull length of less than 10m in the new 34. The plan seems to be working, the boat already nominated for the European Powerboat of the Year 2013 award.

We’re told an intensive effort was put into maximising the open spaces of the sportscruiser as well as the interior areas, where an amidships master cabin is separated from the rest of the interior dedicated to a saloon-galley in the bow that is both convertible and well-lit courtesy of large hull windows.

The exterior line echoes that of the larger models, which began with the collaboration between Atlantis and Neo Design, producing a range of five new models, from 34 to 58 feet, during the past two years.