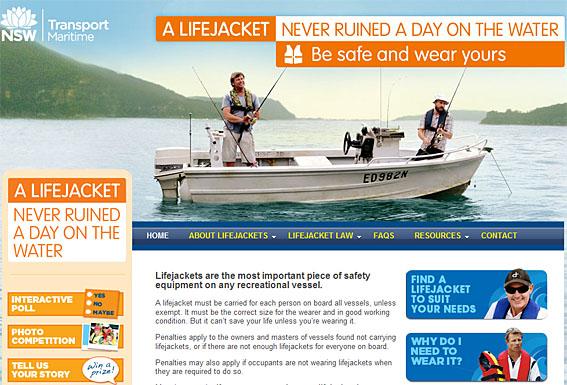 NSW Minister for Roads and Ports Duncan Gay has launched a new water safety campaign, intended to bring down the rising number of boating fatalities in NSW.

Mr Gay said there has been a spike in fatalities on the State’s coastline and waterways, with 10 people killed on the water since July this year.

“Sadly, I’m confident many of these people would still be alive today if they were wearing lifejackets,” Mr Gay said.

“A ten-year report into boating incidents shows 167 people lost their lives in the ten years to June 2012.

“It’s disturbing that 93 per cent of people who died on NSW waterways weren’t wearing a lifejacket, especially given the most common types of recreational vessel fatal incidents involved vessels capsizing and people falling overboard.

“Before you set foot on the deck of a boat, go fishing from a tinny or some rocks, or get on another vessel like a jetski or a windsurfer, we want you to put on a lifejacket.

“A lifejacket never ruined a day on the water – that’s the message of the campaign that will be running intensively over this summer period and in 2013.

“We want people boating to have fun, and to reinforce the message we’ll be giving out some great tickets to the summer cricket as an incentive.

“Boating safety officers carrying out random safety checks of recreational vessels will be giving away tickets to the New Year’s Test match and the One Day Series matches at the SCG as well NSW SpeedBlitz Blues cricket matches to everyone on board if they are all wearing lifejackets.

“It’s no good just having them stored away on your boat, where they are useless in an emergency. Make sure they are in good condition and the right type for your activity,” Mr Gay said.

For more information visit lifejacketwearit.com.au The report is available at transport.nsw.gov.au/news/long-term-study-on-boating-incidents-in-nsw