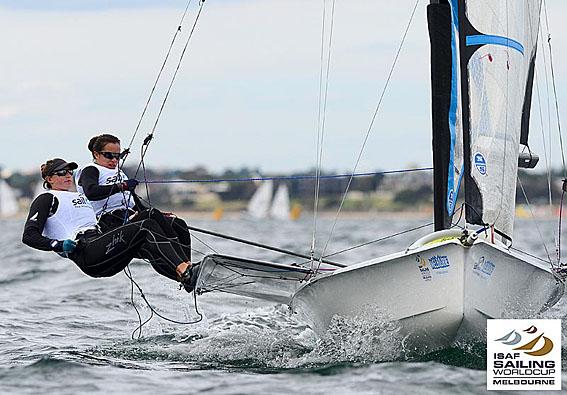 Competition began yesterday in the ISAF Sailing World Cup at Sandringham, Victoria. Here is the report from day one.

Olympic classes, such as 470s, Finns, Lasers and 49ers were out on their respective courses and were joined by invited classes like 29ers, Vipers, Skuds and Access Liberty dinghies. The only one who seemed not to have read the memo was Hughie, the God of Wind, who delivered a fluctuating 7 to 12 knots for most of the morning, predominantly from the Sou’west. This was well below expectations, about half in fact.

Out on the track, it made 17 knots as the afternoon worn on, but definitely kept clocking North as it did so. The Lasers, Laser Radial and Laser 4.7 out on Course C to the North had begun early and were well into racing. Race One for the Lasers saw them complete a trapezoid course, with Jared West lead fellow Australians Ryan Palk and Matthew Wearn over the line. Frederik Westman from Finland was the highest placed International, just missing out in fourth place. After two races, Ryan Palk would take the lead from Tom Burton then Matthew Wearn with Wannes Van Laer from Belgium in sixth place becoming the best International for the day, overall. Frederik would slip to ninth, as a result of a 16th in the second race.

The women race the Laser Radial, which has a smaller sail. Australia’s Krystal Weir took honours for race One from Ashley Stoddart and then Singapore’s Elizabeth Yin in third place. Louise Evans from Australia held out Manon Luther of Switzerland for fourth and fifth, respectively. Manon said afterwards, “Certainly tricky stuff with the waves, but it worked out all right in the end.” She is consistent, with two fifth places earning her that spot for the night, whereas Louise Evans would match Elizabeth for equal third, with the other two on equal points at the top.

USA Finn sailor, Ben Leibowitz was fourth and the highest placed International. He said, “You know I struggled in that first race to pick the shifts, but made up some ground afterwards, especially running back down. It was a bit confusing with the wind and waves coming from different directions. Overall I could not be happier and tomorrow seems like it may be right past the top of my range, so we’ll just have to see what comes.” Brendan Casey from Australia took first place, from Jake Lilley and Oliver Tweddell in third after their first two races.

Of their two wins today in the Women’s 470 Sasha Ryan commented, “It certainly was a tricky day and we’re really happy that it did not blow up like it was meant to. Seems that’s going to be tomorrow. Lucy Shephard and Aurora Paterson hold second place and then the rest of the all-Australian five-boat fleet are equal with eight points.

The RSA 470 Men’s team of Asanthi Jim and Roger Hudson were second overall on the day, behind Australia’s Belcher and Ryan who got two bullets for their day’s work. Roger said of it all, “It seems just like last year, with the waves taking you up and down and the breeze flicking around too. It filled in finally and it was nice racing. An OK day.” Russia’s Vladimir Chaus and Denis Gribanov are in third place, just one point astern of the South Africans.

Moving further South to Course B, it was nearly time for the eagerly awaited, female-crewed skiff, the 49er FX. Just before they got away however, the Viper catamarans had their first attempt at a start, but the adrenalin got the better of the crews and there was a General Recall and the resultant Black Flag. These vessels are exceptionally quick and give an indication as to what we can expect from the Nacra 17s when they arrive. With a lot of mixed crews on board, they are very much of a similar vein. The second start was all clear and then the FX lined up, far more conservatively than the Vipers. The New Zealand crew of Alex Maloney and Molly Meech won that start, but by the time they were heading back down they were in fifth place.

It would not matter as it would turn out, for the entire race had to be abandoned due to the breeze clocking right by around 35 degrees to land at West Nor’west (300). The 49ers were online for a start at this juncture and got away for a matter of seconds before another GR to account for the shift, so one can only say that it will be a long day for sailors and officials alike. Indeed, as the light got less intense, they were still out there with just the one race in the bag.

So after one race, Tessa Parkinson and Kate Lathouras (AUS) lead from Alex Maloney and Molly Meech (NZL). London 2012 Silver Medallist, Olivia Price was third, but as she is sailing as a mixed crew, she is not in medal contention. Anna Kendall and Michelle Muller are in fourth, accordingly.

Luke Parkinson and Fang Warren won the first 49er race of the day with William Phillips and Nicholas Brownie behind them and then George Davies with Jack Lloyd in third. All these crews are Australian.

The Men’s RSX Windsurfer saw Australia’s Sam Treharne get a first and then a second in the two races to lead with three points. Luke Baillie had a first and third to take second place for the day and Patrick Vos secured third place, one point further behind.

The ISAF Sailing World Cup, which is part of Sail Melbourne from December 2 to 8, 2012, can be found at www.sailmelbourne.com.au