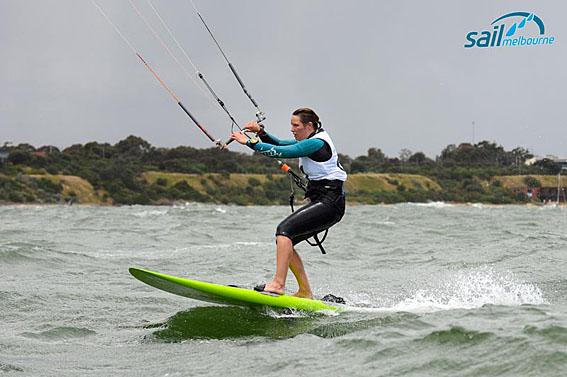 Around 1400hrs on Tuesday, the wind peaked on Melbourne’s Port Phillip at 47 knots from the Sou’west and for the rest of the time it averaged 25knots, plus. For all of the Olympic classes here as part of the ISAF Sailing World Cup this was not such a good thing. However, for the kiteboarders here as part of Sail Melbourne invited class program, these were the conditions they had been hoping for.

At noon, the ISAF Sailing World Cup and Sail Melbourne Event IRO, Ross Wilson, commented on Tuesday's racing schedule in light of the weather. "We have an Answering Pennant over A flying now, which moves racing for the 49er, FX, Skud 18, Access Liberty, Viper catamaran, 29er, Laser 4.7 and 420 to another day. The AP is flying for 470, Finn, RSX, Laser and Laser Radial, with Race Management heading on water to continue their assessment. If it is under 25 knots we will be racing these classes, otherwise it will remain an AP. Kiteboarding is to get underway on time at 1200hrs."

However, at 1530hrs it became clear that racing was not going to occur for the other classes and all racing was abandoned, with an extra race scheduled for both Wednesday and Thursday to catch up.

Watching the skill of the kiteboarders today in the strong conditions, you could see how hard they work to keep it looking smooth. You would think that going back downwind would be easier for them, but this is actually where the real challenge lies, given the power inside the kite.

Germany’s Florian Gruber leads after four races with a string of four, first places. In second is New Zealand’s Torrin Bright and Dirk Hanel of Germany holds down third place still. The women kiteboarders use longer digs to get to the top mark and are slower on the track, as well, so have much longer races before returning to the beach. Their dedication in these types of conditions is more than commendable and together with the Race Management team out there, they deserve a special mention. No doubt they will be very tired tonight.

France’s Ariane Imbert has had three wins and second to stand well clear on the top of the table, with Australia’s Lisa Hickman five points behind her and Marine Sudre a further five points astern, again.

The ISAF Sailing World Cup Manager, Antonio Gonzalez de la Madrid, is in Melbourne to witness Sail Melbourne for himself. “Melbourne has signed on for another four years to have the Sailing World Cup here and this is the first event inside the new structure, with the new format. Miami follows, with Palma de Mallorca and Hyères to follow in 2013. Qingdao will lead off 2013/14 in October, before we return here to Melbourne, Miami, a Middle East venue, then Palma and Hyères. The plan is to have the Sailing World Cup occur on each continent or region and help promote the growth of the sport.”

“The facilities here at Sandringham are absolutely what ISAF requires with a tremendous hardstand area and the huge balcony from which to view the racing, close in shore. It really offers a lot in terms of exposing the Olympic classes to sailors and the public alike”, said Antonio.

The ISAF World Cup, which is part of Sail Melbourne from December 2 to 8, 2012, can be found at sailmelbourne.com.au