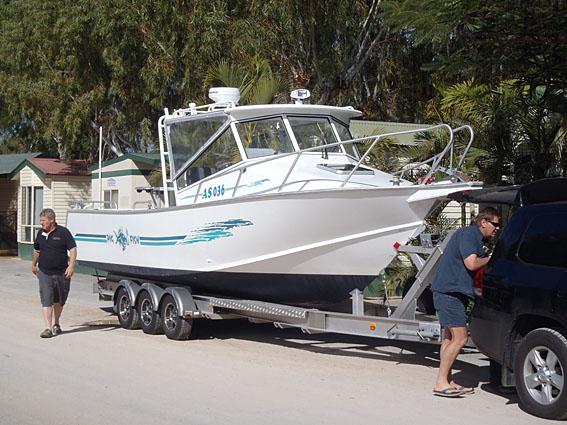 Mercury says that it has a happy customer in the shape of Leon Hodges, who has recently tackled a diesel repower.

The marine company takes up the story: As a serious fisherman and Managing Director of Contract Power - a company which supplies a myriad of power-related goods and services to Australia’s mining industry - Leon is perfectly qualified to judge a new engine.

“This 350hp TDI is exceptional for performance and economy,” he said.

After replacing his older MerCruiser 454 Big Block with the Mercury Diesel TDI engine, Leon set out on one heck of a sea trial.

He chartered Top Gun II, a 21-metre custom built Westcoaster 65 which can sleep 15 passengers. He then filled it with his mates and got it to tow Pig Fish out to the Monte-Bellos islands, 80 nautical miles off the coast of Dampier, Western Australia.

“We were out for four days and while the charter boat stayed in deep water, we took Pig Fish closer to shore and into estuaries - it was fantastic,” he said.

Amid all the fun, Leon took careful note of how the TDI performed.