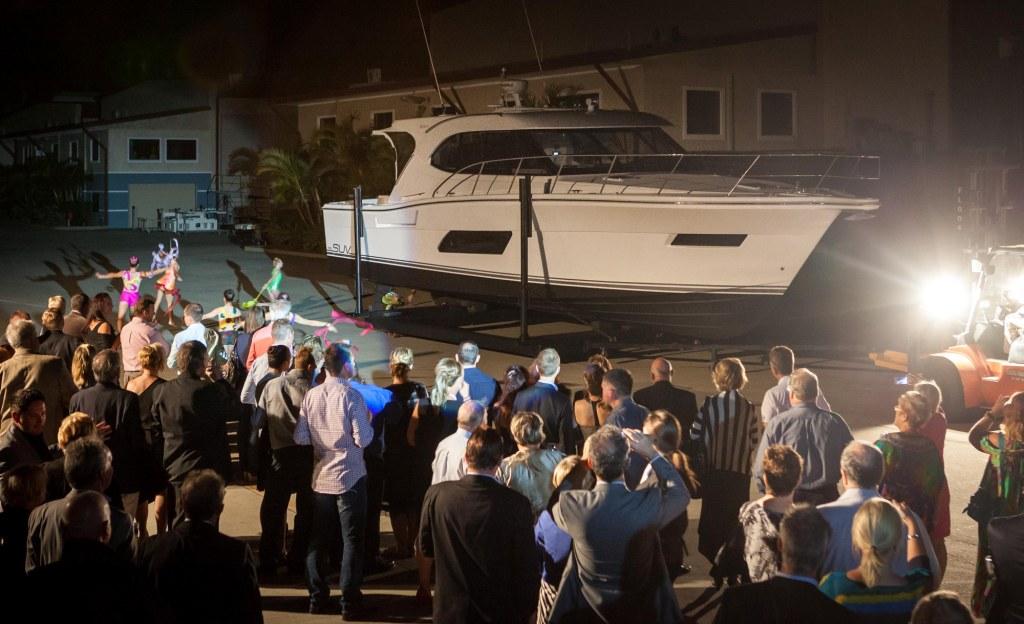 It was an emotional and moving ceremony for multiple Riviera owners Peter and Denise Haig, who had the honour of unveiling the signed six by two-metre banner that marked Riviera’s 5000th boat launch.

Peter and Denise travelled from Sydney to join 180 Riviera owners as they became part of Australia’s maritime history at the special gala dinner celebration held at the company’s manufacturing facility on Queensland’s Gold Coast on November 2.

Peter, who currently owns a 51 Enclosed Flybridge, said it was an honour to be invited to participate in the event.

“When we unveiled the banner with all of the Riviera staff’s signatures and messages on it, we felt incredibly proud to be Riviera owners.
The comments on the banner show just how dedicated and passionate the team at Riviera are to building the best, and it was great to be a part of that,” said Peter Haig.

“It was very emotional watching the first Riviera model, the 38 MkI, roll down the driveway because my very first Riviera was the model straight after that, the 38 MkII, so it brought back a lot of memories.

“It made me realise how lucky I have been over the years to be able to own five Rivieras, and the strength of the brand is testament in that first 38, which 32 years later is still going strong.

“It’s great to celebrate with Riviera owners and the setup was unbelievable. My heart was pounding with excitement as the 5000th Riviera was revealed. It was definitely a proud moment in Riviera’s history,” he said.

The 5000th Riviera boat to be launched was a 445 SUV. This new series of boats was released in August this year and Riviera said six of the new models have been sold to owners in the USA and Australia.
The SUV concept draws its DNA from Riviera’s Flybridge, Sport Yacht and Offshore Express series and is a “true bridge between them all”.

The Riviera 38 MkI’s Brisbane owners, Scott and Michele White, are new to the Riviera family having purchased their boat only six weeks ago.

White said it was a proud moment when their Riviera rolled down the driveway, with spotlights shining on her hull showing off her classic lines.

“When we saw this boat for sale, it was exactly what we were looking for,” said Scott White.

“It had to pass survey, which it did with flying colours. It is mechanically and structurally sound, and inside is perfect. The shape is timeless and we felt humbled and proud when Riviera approached us about displaying our boat at the 5000th Riviera celebration.

“It is our first Riviera and to see her at the gala dinner was a surreal moment for us and something we haven’t experienced before.

“We felt privileged to be invited to the gala dinner to celebrate this milestone in Riviera’s history. The food was excellent and we met some lovely people. Riviera has a strong family culture, it is a breath of fresh air and we look forward to being a part of future events,” he said.

Melbourne-based Riviera owners, John and Fiona Zammit, said it was an event not to be missed.

The couple own a 40 Flybridge, which is their second Riviera.

John Zammit said it was a sensational achievement for Riviera, Australia’s largest and most awarded luxury boatbuilder.

“For an Australian organisation to get to a stage where they are reaching a milestone of building a 5000th boat, and we are not talking about small boats, 5000 boats in anyone’s language is a shipload,” said John.

“The brand loyalty says a lot about the company and the atmosphere on the night was a real buzz. There was the right balance of theatrics, formalities and celebrations, which made it a lot of fun.

“The gala dinner was like a family reunion; everybody was friendly and relaxed and enjoyed catching up with old friends.

“The thing I admire about Riviera is it is very customer focused.
Once you become an owner of a Riviera, you become part of the Riviera family, and it was great to be part of this very significant event in Riviera’s history,” he said.

“It was very moving to see the first Riviera model and the 5000th Riviera side by side, and to share this moment with so many Riviera owners was one of the most rewarding experiences in my entire career,” said Moxey.

“The 38 MkI was built in 1980 and as it rolled down the driveway I could see a few tears of pride on the faces of our loyal Riviera enthusiasts. This was followed by our 5000th boat, the new 445 SUV from Riviera’s newly-released model series, and it was a great honour to celebrate this achievement.

“From the young children performing the ribbon dance through to the delightful meal and formalities, and concluding with the Riv’ nightclub in the factory, complete with giant mirror ball and slideshow projecting 32 years of Riviera boats ? certainly gave us 5000 reasons to celebrate.

“When you look back over 32 years of Riviera and the launching of 72 individual models, the most popular of which we built 288 boats, the launch of the 5000th Riviera is a major milestone in the Riviera history books,” he said.

Above photo: The ribbon dancers celebrated the 5000th Riviera, the new 445 SUV.

Riviera's new model series, the 445 SUV will go down in the history books as the builder’s 5000th boat.

There were tears of pride as the first built Riviera, the 38 MKI, rolled down the driveway.

More than 180 Riviera owners celebrated the milestone at the gala dinner.

A huge disco ball set the scene for the nightclub in the factory as a slideshow portrayed Riviera's 32-year history.