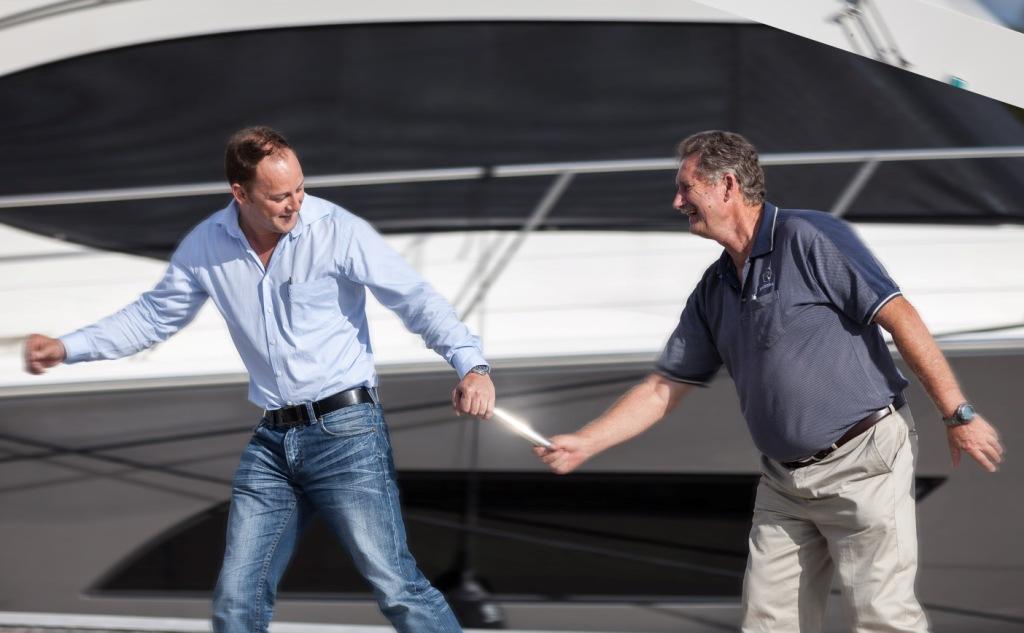 After 47 years of boatbuilding and 18 years with Riviera, Gilfoyle is easing his way into retirement.

Born in Auckland, Gilfoyle left school at the age of 15 to pursue a boatbuilding apprenticeship. He also had a passion for racing offshore powerboats. In 1979, he moved to Australia working for various boatbuilders before taking a position at Riviera in 1994 building the Excalibur range for Wellcraft in the USA.

“He was a great mentor and always kept an even keel. I admire his good judgement in a practical boatbuilding sense and he is exceptionally good at troubleshooting.

“His many years of experience in manufacturing and boat racing have been helpful and the knowledge that he has passed on to myself and many of my colleagues will continue to guide us throughout our careers,” he said.

“I will be coming into Riviera several days a month as a consultant, so that will help me ease into retirement, and this arrangement will allow me to offer my support and knowledge to the production staff,” said Gilfoyle.

“I believe I am going to leave behind a well-oiled team and an extremely well-established company, and I hope that my team will remember the lessons I have taught them and think to themselves, ‘What would Chris have done in this situation?’, when faced with a new challenge,” he said.

Gilfoyle said one of the major highlights of his entire career was between 2005 and 2006, when Riviera built a record 420 boats with 1100 staff onsite at Coomera.

“That really was the pinnacle of my career, to be leading a great team of boatbuilders through one of the busiest times in Riviera’s history,” he said.

“It was also very rewarding to see the steady growth of the company and to be a part of Riviera’s success pre and post the GFC.

“Throughout my career, I have learnt that if you work hard and you do the right thing, the rewards are there. I have always encouraged all of my young boatbuilders to aspire to be the best that they can be, to become leaders and to have respect for themselves and those around them. Scott is a shining example of this and I am very proud to have him step up into my role,” Gilfoyle said.

In 1993, he was awarded Queensland apprentice of the year and after the Excalibur project went on to pursue his interest in the business side of the company, obtaining a Diploma of Business in 1998.

“The past five months have been very rewarding and challenging for me. I have been working on new-product development and we have a lot of exciting and innovative models due for release next year.

“I have also had a strong focus on creating a winning team and driving efficient production. I look forward to the challenges my new position will offer and I feel honoured to be following in my mentor’s footsteps,” he said.