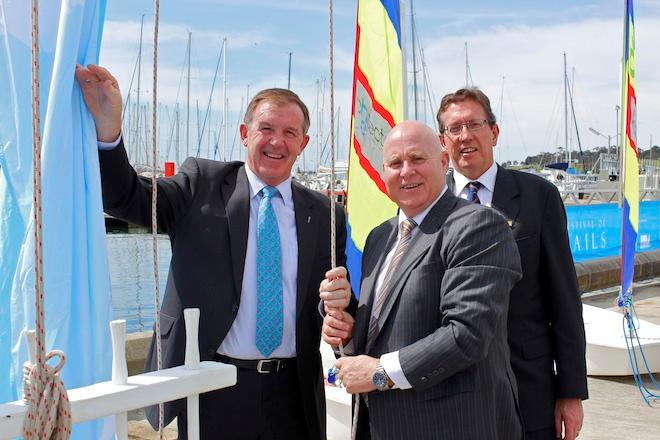 The Minister for Sport & Recreation, Hugh Delahunty today announced the Victorian Government’s continued support of the Festival of Sails 2013, which will be held on the Australia Day weekend in Geelong.

“The Victorian Government is delighted to extend our partnership with the Royal Geelong Yacht Club (RGYC) to ensure the continued prosperity and success of this proud and historic sporting event,” said Delahunty.

“The Festival of Sails first took place back in 1844, and has now grown into one of the largest sailing regattas in the Southern Hemisphere and we are pleased to continue our investment for the 2013, 2014 and 2015 events.

Geelong Mayor, Cr John Mitchell said the Festival of Sails is an integral part of summer in Geelong and remains one of the city’s most well respected and popular annual events.

“The magnificent Geelong Waterfront is the perfect venue for the Festival of Sails, enabling organisers to stage elite-level competition alongside a major shoreside entertainment program,” said Mayor Mitchell.

“The City of Greater Geelong is proud to maintain its longstanding support to the Festival of Sails in recognition of the significant benefits the event delivers to the wider Geelong community,” he said.

In jointly raising the event flag, Minister Delahunty and Cr Mitchell launched the 170th running of the event and signalled that with the support of both State and Local Governments the multi-award-winning event is set to remain a permanent fixture on the Victorian Major Events calendar.

“This event would not be possible if it was not for the substantial support of both the State Government and City of Greater Geelong,” said RGYC commodore Andrew Neilson.

“We are pleased to report that plans are shaping up to deliver another successful event at the Royal Geelong Yacht Club and along Geelong’s amazing waterfront.

“The Festival of Sails has a rich history of delivering strong economic and community benefits to the State and City of Geelong. Whilst the regatta element of the Festival of Sails will showcase the world’s best sailors over a week of competition on Port Phillip and Corio Bays, the event is focused on providing an opportunity for all visitors to be exposed to the wide range of accessible healthy lifestyle activities that our fantastic bays and beaches provide us,” he said.

The Festival of Sails is an iconic Geelong-based event. Free to the general public, the regatta offers plenty of family-friendly on- and off-water activities and entertainment, including live music across three stages, free Come & Try beachside activities and more than 80 stalls exhibiting arts and crafts as well as boating and lifestyle products.

Regatta organisers said that with consistently more than 400 yachts of all types and sizes, more than 4500 participants from around Australia and internationally, upwards of 100,000 festival visitors, and the convergence of local and international boating media, the Festival of Sails provides a perfect opportunity to showcase Victoria and the cities of Melbourne and Geelong, as well as the regions surrounding Port Phillip and Corio Bays.