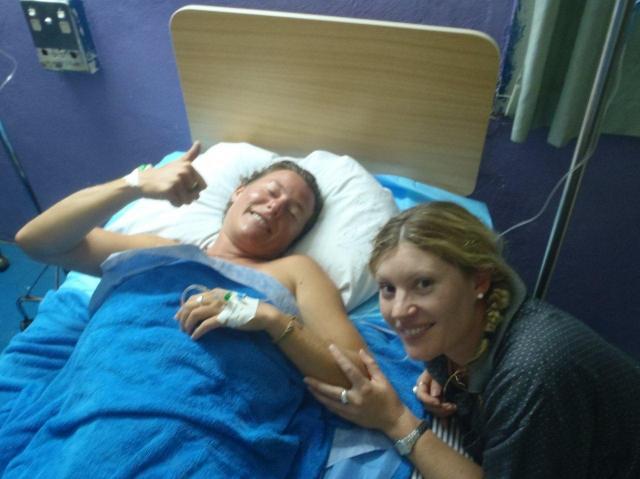 Sept 10, 2012, Eueiki Island, Tonga: Trade-a-Boat’s Ocean Adventure columnist Don McIntyre reports that one of his crew, Kylie Maguire, 28, formerly from Lennox Head (NSW), has survived an attack by a 3m shark off the Tongan island of Eueiki.

The attack occurred at 1600 hours while Maguire and Australian marine biologist Kim Hands were returning from Pau Island, one mile east of Eueiki Island’s Treasure Island Resort, to McIntyre’s 40m motorsailer ICE moored nearby. Hands was preparing for an upcoming marathon swim and Maguire had accompanied her by kayak to Pau for the training session. However, for the return leg Maguire took to the water, while Hands took control of the kayak.


McIntyre told Trade-a-Boat that before setting off from Pau for the return swim, both girls had discussed the risk profile, specifically in relation to sharks.

“Kylie felt a bit uneasy, however, they both agreed that they were in the shark’s environment, but it was what they both do and they would continue with the planned one mile swim home, as the risk was acceptable,” said McIntyre.

“Kylie was swimming approximately 2 to 3m off the kayak on the right side aft, while Kim paddled. They had cleared the outer reef areas and were now over deep, blue water about 700m from Pau Island. She did not see the shark until it hit hard and she kicked and fought it off, then swam, leapt straight into the back of the kayak, losing her fin in the process,” McIntyre explained.

Maguire was bitten around her buttocks and inner thighs, but McIntyre said that although the trauma was severe, no major arteries had been severed. Following treatment by two physicians staying as guests at Treasure Island Resort, she was evacuated to Prince Ngu Hospital in Neiafu, on the main island of Vava’u.


“The guest doctors and resort staff accompanied Kylie to hospital with the ambulance and conferred with the local doctors,” said McIntyre.

“She arrived at the hospital around 1850 hours. All were happy about the proposed treatment plans. The resort doctors felt her treatment would be as good and identical to what would be expected in New Zealand or Australia. The resort doctors then contacted Kylie’s parents for an update and returned to Treasure Island,” he said.

According to McIntyre, Maguire was operated on for two hours at Prince Ngu Hospital, the local surgeon and his team of five reporting that the main wound on her buttock had been cleaned and stitched, and another on the front of the opposite leg dressed.

“She will be in Hospital for at least a week,” said McIntyre. “He (the surgeon) stressed that she was very lucky, which we all knew.”

The doctors estimated the shark’s teeth to be about 25mm across with a bite height, top to bottom, of around 40 to 45cm. “Miraculously, Kylie appears to have suffered no muscle or tendon injury and her vital blood veins were all missed. She is happy that she put on 6kg in the past few months from Jane’s cooking, as the fatty areas took the hit — her words not mine!” he said.

Don McIntyre will relate Kylie’s shark-attack story in more detail in his next installment of Ocean Adventure, in Trade-a-Boat Issue 432, on-sale October 10.

Photo: A very lucky Kylie Maguire gives the thumbs-up after surviving a shark attack in Tonga and is comforted by Kim Hands, who was with her when the incident occurred.