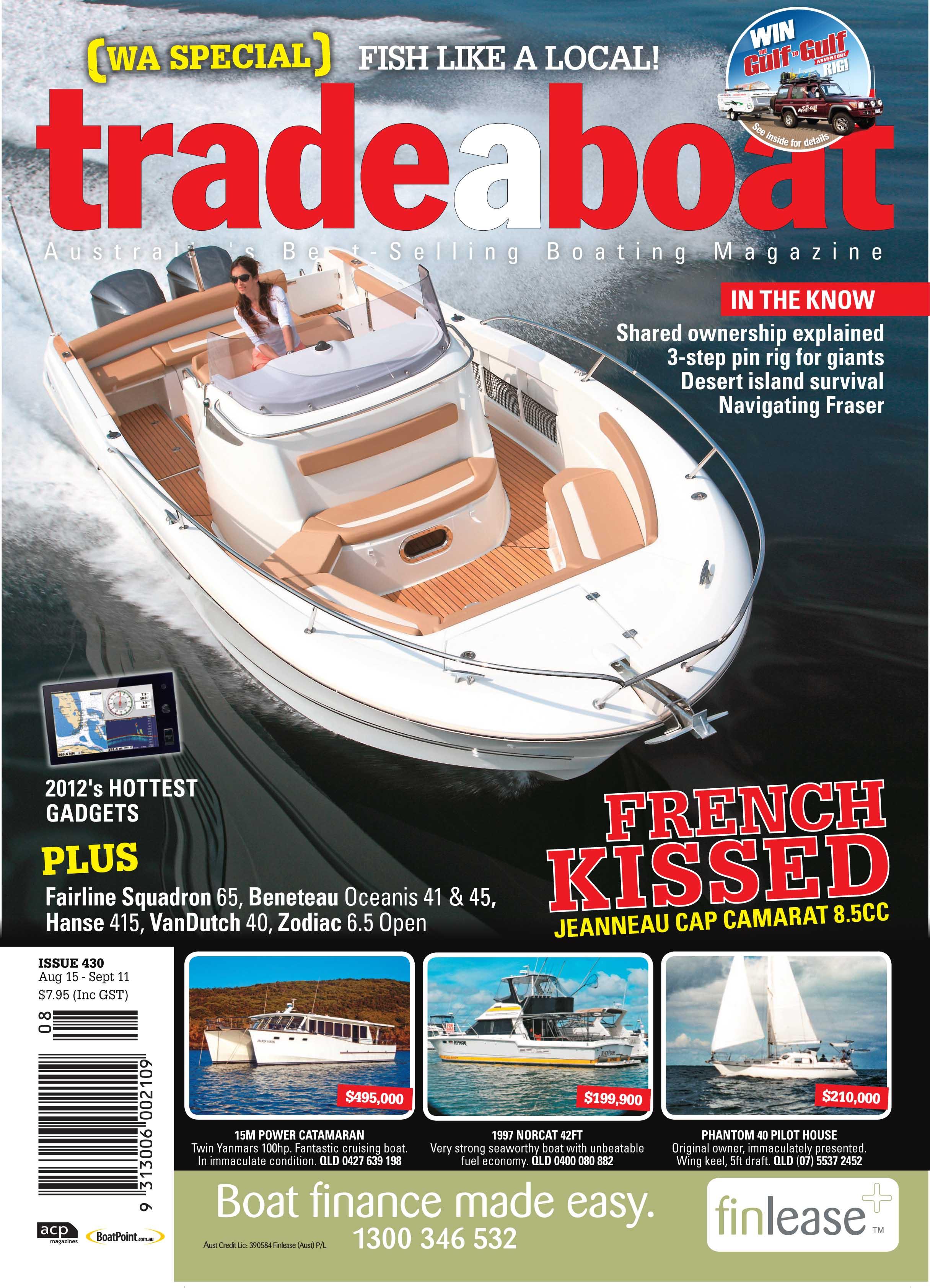 Rolf Vrolijk, principle designer for the Alinghi sailing team, took it upon himself to ensure this special project made a statement of his company’s commitment to the Dehler cause. Dehler, a bespoke German yacht manufacturer recently became a part of the Hanse Group, which also owns Moody Yachts.

The effects of this takeover for Dehler have become immediately apparent. The increased economies of scale afforded by being part of a much larger buying group allow these marvellous boats to be offered to the Australian public at significantly reduced rates, some 20 to 30 per cent below two or three years ago, and with no loss of quality or workmanship.

As I walked along the jetty towards the 41 my first impressions were reinforced, it looked like it was a fast boat, but the proof is in the pudding. I had my reservations about a boat designed and built to be a performance racer and a luxurious cruising boat. Is it really possible to incorporate the best elements of both and not fall foul, as with so many hybrids, and become a jack-of-all-trades and master of none?

PERFORMANCE CONSTRUCTION
Becoming part of the larger Hanse Group has in no way compromised the build process of Dehler boats, which has always been renowned for its level of quality and artisanship. Indeed, at this stage Dehler continues to utilise its own manufacturing line at Freienohl near Dusseldorf. I deliberately avoid the use of the word production, as the build process would be considered highly labour intensive by most.

The Dehler 41 is a full vinylester lay-up boat with a foam core. This process is much more expensive than polyester and balsa but provides considerable advantages from the point of view of stiffness and lightness, elements key to the success of any cruiser/racer.

The hull is GRP and of vacuum infusion sandwich construction, using very thin layers of glass fibre, a foam core, and hydrolysis-proofed vinylester resin. The deck is a GRP handlaid sandwich with end-grain balsa core. Combined, this provides a very durable, yet light boat without taking any shortcuts or making sacrifices in terms of fitout or creature comforts.

MAGNETIC PERSONALITY
I am trying to listen to what the nice men from Team Windcraft, the Australian Dehler representatives have to say about this boat, but up close to the Dehler 41 all I really want to do is climb aboard, which I am soon invited to do. One can see immediately this is a quality yacht with no attention to detail spared.

For a 40-footer the open cockpit is generous indeed. I should imagine it would be great for entertaining or after a swim, and with its mainsheet runner flush to the deck, is well laid-out for racing. Also flush to the deck are large hatches; both enhance the 41’s smooth racing lines and provide one less places to stub a toe. In fact there are not many toe-stubbing spots at all on this boat, even the cleats can be pushed down level when not utilised, adding to the harmonious aspects of look and utilitarianism.

OPTIONS IN FOCUS
Down below the Dehler 41 is spacious and well appointed. Little things, like the quality of the taps, are noticeable as is the subtle Dehler logo on the chart table top. There are three interior and accommodation layouts available.

This boat has a large double master forward, a well laid-out saloon and galley with double sink and an aft cabin on the starboard side with a double bed. Aft on the port side a large stowage locker is accessed via the head and a separate shower cabin. Options here include a mattress and shelves instead of the stowage locker, or a mirror image of the starboard aft cabin with double bed, although this layout loses the very desirable separate shower cabin and wet gear/sail locker. As mentioned, the boat we tested has the standard setup with all the ‘wet parts’ of the boat together and the sail locker accessible internally or from the cockpit.

Downstairs is a very comfortable place to be, without being opulent or ostentatious. It is light and airy thanks to four hull window fittings reminding me of horizontal versions of archer’s slits in a castle wall — though all very chic and modern. Topside is impressive too, particularly with posh twin Carbonautica wheels.

WINDCRAFT EDGE
The new range of Dehler boats has only been available via the Team Windcraft group for a short time, yet it is already a success story with eight boats sold here in less than 12 months. Clearly amateur Australian yachties are keen to make the most of both worlds, with a modern family cruising yacht that transforms into a fleet beater on race day.

While the test boat is one of only two 41s in the country the owner has already had some racing success since upgrading from his Hanse, and he and his crew are learning more week-by-week and tweak-by-tweak. The Hamilton Island regatta is on the programme of events for Ultreya and will prove to be a good measure of the boat’s pace.

Ultreya is a Spanish word originally used by those on a pilgrimage as a form of greeting and translates as ‘onwards’. The owner of Ultreya has an interest to improve as a racer and hence his decision to opt for this boat. The Dehler 41 has a bespoke feel about it and with help from the Windcraft team, he has been able to customise the yacht to his own requirements, budget and technical specifications.

Team Windcraft are well versed in setting-up boats to one’s needs and provide excellent advice. So helpful in fact they will even come out sailing to make sure you get the best out of the yacht you have ordered. No doubt, at least one of the eight racing crewmembers onboard Ultreya at Hamilton Island will be a Windcraft man. It is tough doing regular overtime work but the dealership’s crew seem to enjoy it!

The owner of Ultreya is quite serious about his racing and has opted to take the forestay right to the stem of the boat rather than sticking with the standard furling setup. The yacht has an alloy rig, set-up in Germany, though carbon is an option of course. The spinnaker arrangement is, however, done here for local conditions. Ultreya also has a removable transom that can be taken off in less than half a day if preparing for a regatta.

HOISTED ALOFT
So would the Dehler 41 deliver on its promise to be a competitive race machine and a fun cruising boat?

We slip Ultreya’s lines and head out into Sydney Harbour. The engine, a 39hp Volvo Penta D2-40, is quiet and has the convenience of keyless start, but this is a sailing boat and we have come to see how she sails. The answer is, as I expected, beautifully.

This Dehler 41 moves well in even the lightest zephyr and is incredibly responsive, picking up speed and power in the gentlest puffs. I am reminded of an English America’s Cup boat first seen during the Fremantle campaign called White Crusader. With everyone else becalmed on a foggy day at Royal Burnham Race Week it came out of the mist like an enormous apparition still moving ahead like some harbinger of perpetual motion. So too Ultreya. It really is onwards as we hoist the smallest kite.

I would love to have experienced what this boat has to offer in a greater variety of conditions than the barely perceptible puff we experienced on the harbour.

Dehler has thought of nearly everything to make a manageable and competitive craft. Again, great attention to detail, such as the quality wooden foot blocks to assist the helmsman when the boat is heeled over and the slightly oversize winches (another optional extra), ensure the Dehler 41 is a pleasure to sail.

I do wish someone had remembered to sort out a couple of winch handle pockets as there are plenty of positioning points in the big cockpit. Regardless, if its responsiveness at helm is anything to go by I am confident stronger winds would afford an exhilarating and controlled ride.

THE UPSHOT
Too soon our time on the nimble Ultreya is over, the Volvo Penta is once again quietly running the show as we return to the Yacht Squadron. I take a little longer to examine in depth the remaining aspects of interest once we have tied up. Delving deeper into the hatches, lockers and cupboards only reinforces my view that there has been no scrimping on material in areas not visible without searching.

The Dehler 41 is an incredibly well put together package as befits a semi-custom item and there are all manner of options that can be incorporated dependent upon one’s budget and taste and style, from complete teak sidedecks to extra speakers in the cockpit or an extra set of spring line cleats mounted midships. With both a cruising pack and performance pack on offer you can push the yacht towards the end of the spectrum you favour.