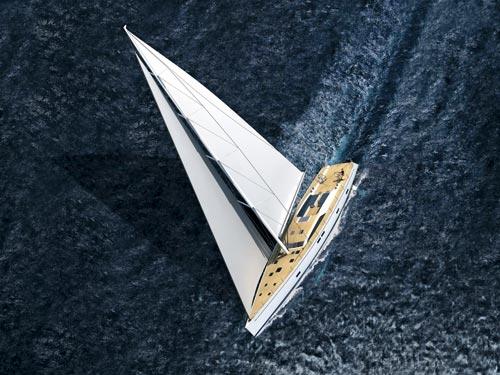 If you have the wherewithal to contemplate a yacht around the 100-foot mark (and who doesn’t? Oh hang on, I don’t…), then it seems these days you are spoilt for choice.

Alongside various custom projects that are popping out of yards all over the world, there are the established Euro fleet lines of the likes of iconic Wally, performance-orientated Southern Wind, or production top-end Swan. Indeed, Swan has now announced a new addition to its upper range, taking the form of the Swan 105.

Described by Nautor’s Swan as “a bold statement in luxury style and oceangoing performance”, the new design follows on where the previous 112, 100 and 130 models left off. Styling on deck is sleek (and, in this correspondent’s opinion, carries more than a passing resemblance to the Southern Wind fleet), although the emphasis is certainly on cruising.

The forward, guest cockpit flows easily from the companionway and is designed to take eight people comfortably whether sailing or relaxing alfresco at anchor. The area is also shaded by a hydraulically operated bimini. Below decks, a number of flexible layout options include provision for a forward or aft master cabin, and several hull windows combine with deck hatches and the raised saloon windows to ensure plenty of light reaches the interior. The broad stern opens out to create a generous bathing platform, while an aft garage takes a tender of up to 4m in length.

The performance aspects have not been neglected, however. The business end — the helm and sailing cockpit — includes a full-width main track, and twin wheels ahead of a large and open aft deck area; perfect for cosseting the navigators and tacticians while the real crew get on with the job of sailing the yacht. Design comes from German Frers, who has a longstanding association with the marque, and Swan’s in-house design team.

The 105 marks the next step for the Swan line. “The Swan 105 is essentially an extension of our fast maxi-cruiser concept, central to our portfolio of yachts,” comments Nautor’s Swan commercial director Luca Lucheschi, who has been involved with the 105’s design from the outset. I think I’ll take two.