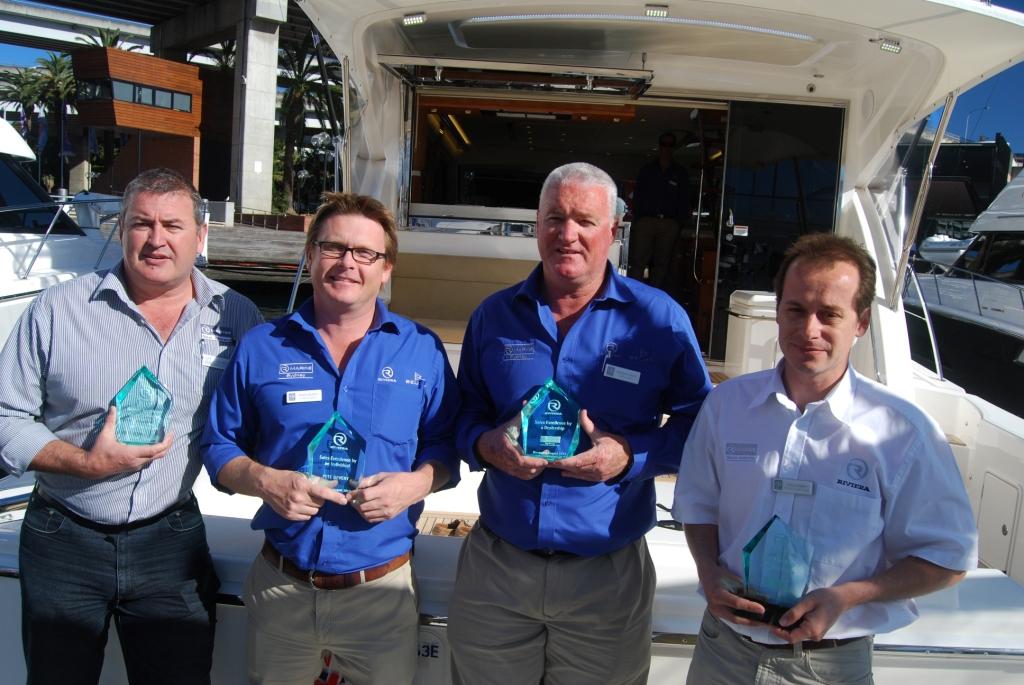 Riviera’s night of nights was all about recognising marine industry excellence and it was the enthusiastic, proactive and exceptional customer service from R Marine South Australia that earned it the Overall Dealership of the Year award for 2012.

R Marine South Australia received the coveted Overall Dealership of the Year, which came as a welcome surprise to dealer principal Paul Harrop.

He said it was a great achievement for such a young dealership.

“I commend the team for their efforts over the past 20 months and without the leadership and guidance of long-time and experienced Riviera boat owner Ross Almond, I don’t think we would be as successful as we are today,” said Harrop.

“Our small team is very close knit, we work extremely well together and have many years of marine industry experience, but Ross’s experience as a Riviera boat owner is invaluable, and I believe it is the introduction of the Riviera Owners’ Club and monthly social gatherings that has earned R Marine South Australia the respect and loyalty from our customers.

“We feel extremely proud to have won this highly regarded award and to be recognised for our efforts because for the team at R Marine South Australia, what we do is a lifestyle not a job,” he said.

Steve Domigan from R Marine New Zealand received the award for Service Excellence by an Individual for his work ethic and continuously going the extra mile for Riviera owners.

Domigan said he felt honoured to receive the award.

“I consider the award as more of a team effort than the name implies. My team work just as hard as I do and they deserve as much credit as I do,” he said.

“My entire team of engineers, boatbuilders, electricians, valet staff and apprentices are service motivated and do the very best they can by our customers. We are all in this business because we have a passion for boating and all things marine.

“I would like to acknowledge Bruce McGill and the other directors who have steered us through some challenging times, we couldn’t do it without their support,” Domigan said.

“I am very proud of R Marine Sydney’s sales success, positive attitude, enthusiasm and the fact that we work as a team with Riviera and the other R Marine dealers, it’s an exceptional relationship,” said Joyce.

Devery began his career in the marine industry 14 years ago and has achieved the Salesperson of the Year award for the past three consecutive years. He said it was extremely gratifying to receive such a prestigious accolade.

“I appreciate the recognition by Riviera for my efforts and I feel very proud to be associated with what is truly an Australian boating icon,” said Devery.

“Dealers are judged on their ability both to service Riviera customer needs and boats, conduct client events and professional representation of the brand, overall boat sales both of new and pre-owned Rivieras, co-operation with the factory’s business guidelines, ethics and communication with dealer support services, dealership presentation and customer satisfaction,” said Welch.