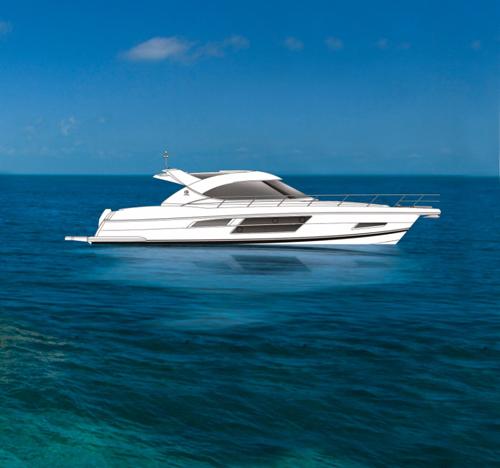 Australian luxury marque Riviera says all will be revealed at the 2012 Sydney International Boat Show when it launches the first model in an “exciting and unique” new model series.

Riviera continued it has been tight lipped during the development and construction of this new model, which is neither a Flybridge, Sport Yacht or Offshore Express.

Stephen Milne, Riviera’s director of brand and communications said this new series was like no other ever produced by Riviera.

“This new series has been kept well under wraps during its development process until its official release at the Sydney International Boat Show in August,” said Milne. “The first model in this new series will be in the mid-40ft size range and will have wide appeal as Riviera’s designers describe it as ‘something quite different’.”

Two models never before seen at a boat show are the 63 Enclosed Flybridge and the 5000 Sport Yacht that boasts a whole host of new design enhancements.

The 63 was originally a customisation of the 61 Series II for a New Zealand client, where by extending the waterline length Riviera’s designers were able to increase the cockpit size making this boat extremely versatile for both long-range cruising, entertaining and fishing.

“This is of increasing importance to our owners as their boating ambitions are taking them further afield to new and remote cruising destinations.

“Judging by the strong interest in this model, with two sold off the plan at the Miami Yacht and Brokerage Show in February this year, it seems boating enthusiasts agree that this new model is a further improvement of the acclaimed original design,” he said.

Riviera tells us the next generation 5000 Sport Yacht has undergone a series of design enhancements, including new hull windows to the aft stateroom with opening circular portholes, additional storage cabinets, LED lighting throughout, new entertainment systems and folding backrests to the foredeck sunpad to name a few.

“The 5000 Sport Yacht has retained the sleek, classic lines of our proven design and with the addition of large new hull windows, makes this a very attractive vessel from the inside and out,” said Milne.

“As one of Riviera’s most popular models with 50 delivered to date, we are certain our next generation 5000 Sport Yacht will attract strong interest at the show.

“The Sydney International Boat Show marks an exciting time for Riviera with the world premiere of our unique new model series and the release of two exciting new model enhancements, thus reflecting the new level of energy at Riviera as we move positively forward under the new ownership and guidance of Rodney Longhurst,” he said.

The Riviera display will be located on the southern end of the Cockle Bay Marina, Darling Harbour.

The full Riviera Sport Yacht line will be on display at Sydney International Boat Show, including the flagship 5800.