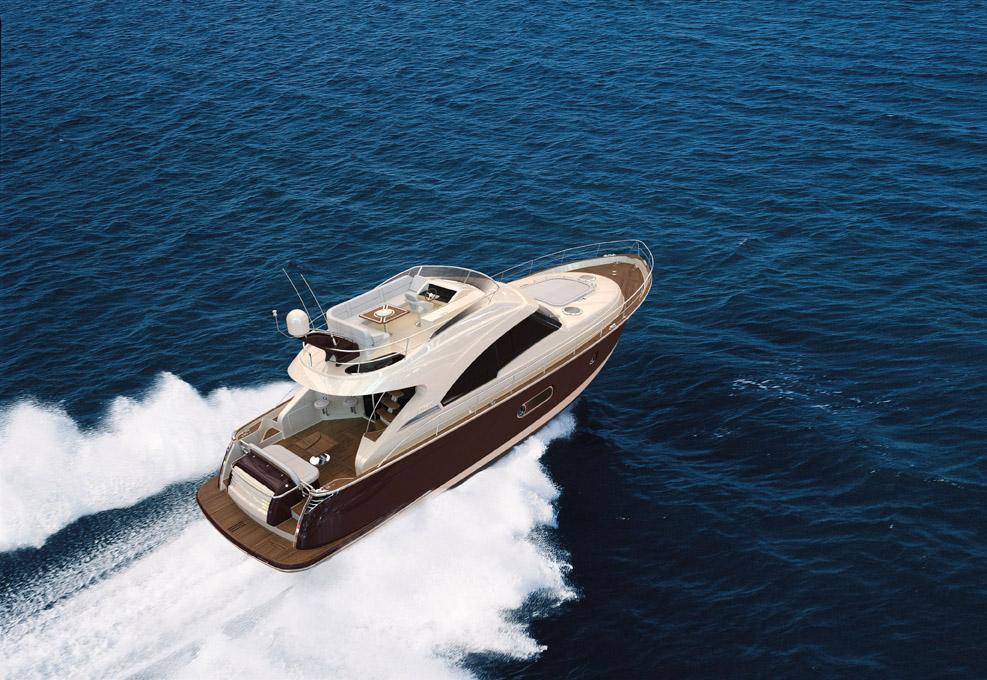 “This will be the world release of this new model that in its Hardtop design has already secured six sales in as many months,” said Belize Motoryachts spokesman Ryan Hanson.

“This new model features an elegantly curving deep-tread staircase leading from the cockpit up to the Daybridge, where the open-air feeling makes for an exhilarating boating experience,” he said.

The Daybridge features a plush L-shaped lounge with high-low table, which can be converted to a second sunpad, opposite the wetbar.
A second helm station, with weather-protection cover is located on the Daybridge. The main helm station has joystick control, two 15in Raymarine multifunction glass screens flanked by a pair of SmartCraft digital tachometers, Wema fuel and water gauges, a chain counter, electronic engine controls, automatic trim tabs (with manual override), electric steering with adjustable wheel, standard autopilot, and cockpit video cameras monitoring the boat’s extremities. The skipper is ensconced in a Treben Italian electric leather helm seat, with matching passenger seat that has a fore-and-aft chaise lounge lying alongside.

“An important aspect of the Belize belief system is a determination to source the best, no matter where in the world it exists,” said Hanson.

“The 21st century has seen a shift in boatbuilding from northern Europe and northeastern USA to East Asia, notably Taiwan, where some of the world’s best and most luxurious motor yachts are now built,” he said.

According to Belize, the Taiwanese boatbuilding yard, Kha Shing, has been selected to build its motoryachts.

The new Belize 52 Daybridge is fully air-conditioned and features three cabins, including a full-beam master stateroom with en suite and opening port lights on either side to provide cross ventilation. Belize adds that fabric paneling, leather, weatherproof leatherette and woodgrain are used to create a “warm and inviting ambience, and contribute to excellent acoustics”.

According to the builder, the sheerline and profile of the Belize has kept the traditional ‘timber boat’ look without sacrificing space below decks. “The Belize 52 is surprisingly spacious with larger beds, heads, showers and living areas than similar-sized production counterparts,” said the company.

“The Belize 52 Daybridge is truly an outdoors experience, which is why a lot of attention has been devoted to making the most of that experience.

“The wide, walkaround sidedecks make it easy to get from the cockpit to the huge sunpad, which sprawls along the centreline of the forward deck,” said Belize.

Moving aft, the swimplatform’s centre section rises and lowers hydraulically to allow access to the transom’s electric tender garage, which is said to have space for a 3m tender and outboard that can be easily loaded by the inbuilt electric winch.
Above the garage is another hatch that lifts to reveal the electric barbecue and sink.
Teak decking is standard.

The cockpit contains a rear lounge with storage underneath and a folding high-low table and to port a breakfast bar with swivel stools.

The galley features natural, solid surface benchtops and high-quality Miele appliances, such as the induction cooktop, combination oven and microwave. The galley is also complemented with a huge window, giving the chef plenty of light and an ocean view.

Across from the galley is a plush L-shaped dinette and with extra storage for crockery, glassware and charts all tucked under the lounge.
Opening side windows bring in natural air flow and sea breezes.

Propulsion is from twin aft-facing Cummins Zeus 3000 bronze pod drives, with through-hub underwater exhausts and lightweight carbon fibre driveshafts to reduce weight and horsepower loss from the Cummins QSC six-cylinder turbo-diesels delivering 600hp. Tank-tested at the Australian Maritime College (AMC) in Tasmania, the warped-plane hull design is described has having a very fine entry and strong flare decreasing to a fairly flat run aft and a deadrise of 12 degrees. The Daybride has a claimed top speed of around 30kts, a 25kts cruise speed and a comfortable range at 22kts of 400nm leaving 10 per cent reserve fuel.

“Further aiding efficiency are pod tunnels, which are scooped into the aft section, protecting props and allowing a proper keel to assist tracking, with a very substantial turn-down chine in the bow which actually deflects spray to deliver a more dry and comfortable ride offshore,” said Hanson.

CZone digital switching operates all onboard electronics, which are networked to an 8in touchscreen.

Belize Motoryachts on-water display will be located within the Riviera exhibition space on the southern end of the Cockle Bay Marina, Darling Harbour from August 2 to 6.