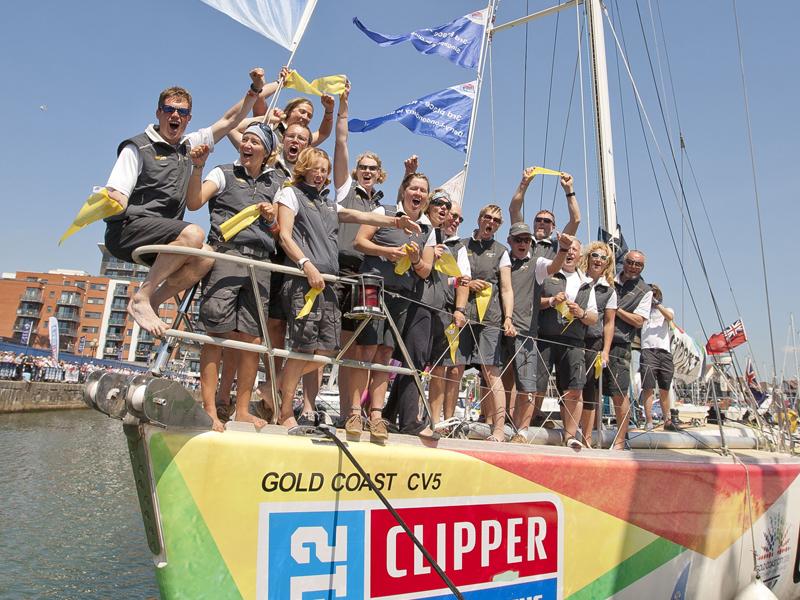 , one of two Australian entries in the Clipper 11-12 Round the World Yacht Race, secured its 12th win out of 15 races with a triumphant return to Southhampton, UK and overall victory in the world’s longest yacht race.

A spectacular scene greeted the Australian crew with thousands of people turning out to watch the end of Clipper 11-12, as the non-professional crew onboard all 10 ocean racing yachts marked the end of a 40,000-mile challenge of a lifetime.

After 51 weeks of ocean racing Gold Coast Australia took first place in the Clipper 11-12 Round the World Yacht Race. Visit Finland finished second, while a battle towards the end saw Singapore pip Dutch entry De Lage Landen to the post for the third and final podium position by finishing 20 seconds earlier.

The fleet crossed the final finish line of Race 15 — a 260nm sprint from Den Helder, The Netherlands to Southampton — where Clipper founder and chairman Sir Robin Knox-Johnston, the first person to sail solo non-stop around-the-world, led a parade of sail in Southampton Water to welcome back the fleet of 10 identical 68-foot racing yachts.

Tasmanian skipper Richard Hewson and his crew proudly stood on the bow of Gold Coast Australia as thousands of people applauded the victorious Australian team.

“It has been an amazing adventure,” said Hewson at the trophy presentation.

“From the start, we’ve had plans to dominate the race and we’ve definitely done that. It was very competitive and we’ve been racing against some fantastic, tough competition all the way.

“We’ve achieved so much more than we set out to achieve and had so many wins and podiums, but to stand here on the stage as winners is unbelievable. I’ve had an amazing crew that’s made this happen,” he said.

The other Australian entry, Geraldton Western Australia finished sixth in the final rankings.

All day tens of thousands of people lined the dockside of Ocean Village marina in Southampton to welcome home the crews after a gruelling, almost year-long challenge that has seen them take on the world’s largest and most formidable oceans, endure violent storms and frustrating calms, extreme heat and bone-numbing cold while racing ferociously to win.

Clipper 11-12 is the eighth edition of the event, comprising more than 51 weeks of ocean racing, visiting 15 ports of call on six continents. It is also the last race on Clipper 68 yachts, as a brand-new fleet of 12 identical 70-foot racing yachts are launched for the Clipper 13-14 Round the World Yacht Race, which is 82 per cent full already. Since the race started, more than 4000 people from all walks of life are said to have participated.


Photos: The triumphant crew of Gold Coast Australia line the bow in their victorious return to race-start at Southampton; Tasmanian skipper Richard Hewson holds the winner’s trophy aloft at the Clipper 11-12 Round the World Yacht Race presentation.