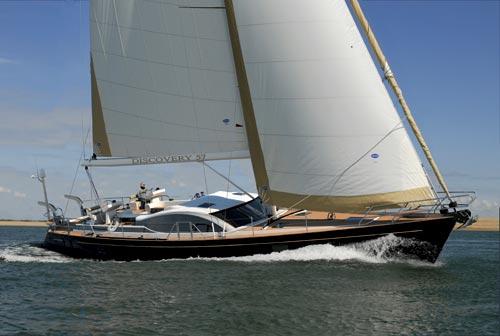 There’s no question that there are times, like the miserable bank holiday weekend that has just passed as I write this, that I would do anything to sail over the horizon in search of better weather. UK builder Discovery Yachts is one of those high-quality small-quantity builder that produce a yacht that would suit perfectly, and now it is trying to tempt me further with the upcoming launch of the new Discovery 57.

Following the DNA of her sisters, the 55 and 67, the new 57 will be the first Discovery to employ full vacuum infusion in her construction — which, according to the builder, will also make her the largest resin-infused sailing yacht to be built in Britain. “The 57 will have 20 per cent more volume than the 55,” Discovery Yachts managing director Nigel Stuart tells me, “and it became apparent that we were adding a lot of weight. We looked at infusion, and worked with High Modulus on the structure, and the result is a yacht that will use half a ton less resin than the 55…”

The hull, designed by Ron Holland, is slightly fuller in the bow than the 55 but has been designed to retain the seaworthy characteristics of the existing yachts in the range, while allowing for fast passagemaking in lighter airs. The interior design and styling has fallen to renowned superyacht designer Ken Freivokh. “Bringing in Ken was inspired,” Stuart continues. “He had some really good ideas, and he started to fiddle around with the joinery and style, and we ended up with a complete restyle — the galley got shifted, and the saloon and aft saloon were reworked. He was also involved in some of the deck styling too, including the cabin top styling and the helm area, which is now less clunky and has more of a wow factor.”

Discovery itself, meanwhile, has been busy working on a number of things to ensure that the 57 is ideally geared for shorthanded sailing. Innovations include a new davit system for launching the tender aft, designed to make sure the tender stays clear of the stern during the launch and recovery procedure, and the use of a two-way powered Lewmar winch for the mainsheet. “The mainsheet is forward on the cabin top,” Stuart explains, “so with the two-way you can ease the main from the helm when you feel the yacht powering up through the wheel without leaving the helm. We’re trying to make everything set up for shorthanded sailing, and it’s something we’ve always been good at.”

The 57 will be offered initially with a normal keel at 2.35m and a shallow draught (2m) option, with a lifting keel likely to be offered from 2014. The yard plans to build six a year to begin with, and the first 57 is due to ready for the 2012 Southampton boat show in September — just in time for me to pick one up and head out into the blue yonder in search of better weather before the Euro winter kicks in.