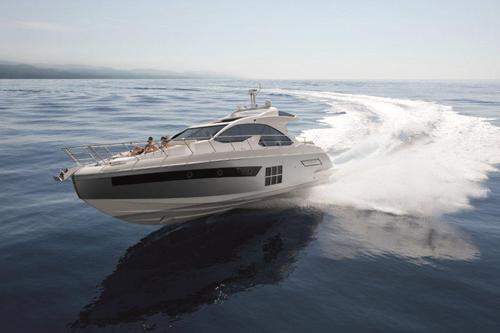 Italian marque Azimut has been hard at work revamping its range over the last couple of years. The top end — the yachts over 100 feet — now have distinctive cross-model styling, and have been dubbed the Grande range. Meanwhile, the mid-sized models have also been undergoing a refresh, and the latest model to be announced is the 55S — a critical one to nail, sitting as it does right in the heart of the classic flybridge battlegrounds.

The 56ft8in 55S is no fly though — rather she is the nautical equivalent of a sports hatchback, complete with hardtop and sunroof to open the interior saloon to the skies. The overall design incorporates new elements along the length of the hull, from a new bow to a new garage aft, maximised thanks to a pivoting garage door that allows stowage for a tender up to 2.85m long. The hull and superstructure get a new window design, including a set of six hull windows amidships to flood the central master cabin with light. The layout includes two further guest cabins, including a VIP forward, and there is also provision for an additional single crew cabin in the bows — a nod, perhaps, to the rising market in Brazil, which tends to favour a paid skipper even on the smaller yachts.

Construction will include carbon in the hull, and carbon-glass sandwich for the superstructure, while power will come from three Volvo Penta IPS units that should give a cruise speed of 31kts (with an estimated 310nm range) and a top speed of 36kts — handy for escaping the bad weather in Northern Europe (or the tax police in Italy…).
The first 55S is due to be shown at the Cannes boat show in September.