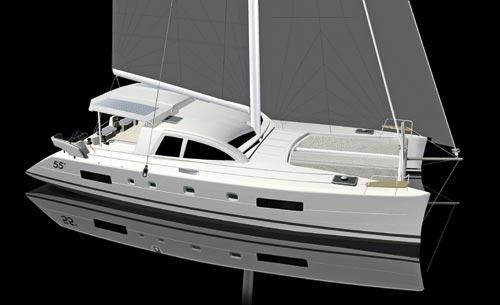 French cat builder Catana has been quick to capitalise on the upsurge of interest in sailing and motor catamarans that appears to be sweeping Europe at the moment. They recently unveiled the marque’s new Catana 55 which, they say, is essentially a sport version of the current 50.

“It features the same accommodation and saloon as the 50,” they told me, “but we lengthened the bows. It’s a sport version of the Catana 50 because it has a very big headsail.”

Of course, longer hulls does mean there is more space for that accommodation, and the 55 will be offered in four interior variants: an owner’s version with three cabins (with the starboard hull given entirely to the owner); an owner-plus-skipper version, which has an additional skipper’s cabin in the fore end of the starboard hull; a five-cabin family version; and a six-cabin charter version.

Euro interest in cats is on the rise, enter Catana's new 55 (above). The 55's owner+skipper layout (below).

SUNREEF 82 DOUBLE DECK
Meanwhile, Polish builder Sunreef has released details of the latest big cat to join its line-up — a Sunreef 82 Double Deck, which was signed last May, and which is due for launch in the summer. At 82 feet LOA, and with a beam of 37 feet, this imposing looking cat has a custom interior configuration including a master suite, complete with gym and spa bath with panoramic views, forward on the main deck and serviced by walk-in wardrobes and an expansive en suite down one level in the port and starboard hulls. Aft of this, a raised interior helm station and mezzanine coffee table offer expansive views forward and to the sides, while overlooking the main saloon seating area aft. To starboard, the saloon will feature a bar. A further five guests in addition to the owners will be accommodated in a VIP cabin with queen-size bed and a further double/twin cabin that also offers a Pullman berth. The yacht will also carry two crew.

Of course, the advantage of a large cat platform is that you get an astonishing amount of exterior space for your money — for example, the cockpit is some 64m², and the flybridge offers not only an exterior helm station, but also dining, sunbathing, a barbecue, bar with icemaker, and additional seating around occasional tables. And, of course, you get a supergiant trampoline up front to play with.

-The Sunreef 82's stateroom (above) features a spa (below).

-T he Sunreef's main saloon is overlooked by a raised helm and mezzanine coffee table with bar stools.