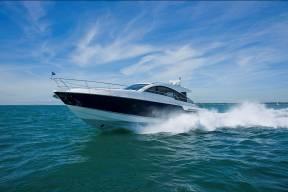 Fairline tells us the popular model has already seen strong interest this year in Australia, with the sale of three boats to date and another due for delivery to new owners in late June 2012.

The express cruiser has a spacious three-cabin layout plus optional fourth-crew cabin and en suite. With the master cabin and en suite placed forward in the hull, owners benefit from full-width accommodation. Fairline said a sense of open space is enhanced by plenty of natural light and a flat floor that’s not widely available in mid-cabin arrangements.

“This model is especially popular for its innovative design, functionality and Targa style,” said Josh Metz, from Fairline Queensland. “With sleek design and high performance, it also allows under-bridge access which is perfect for the Gold Coast waterways.”

Launched in 2010, the Targa 58 Gran Turismo last year received a UK-based Motor Boat of the Year Award in the Sportscruiser Above 45ft category.

“Positive market feedback along with the strong Australian dollar exchange rate against the pound sterling makes for an exceptional buying environment,” added Metz.

On the evening of the show’s launch, Fairline says it will co-host an invite-only event at its stand in partnership with Bang & Olufsen, showcasing its latest high-end merchandise to an exclusive audience.

The boatbuilder said that in 2010/2011 Fairline Western Australia achieved the highest sales rating in the region for the fiscal year completing 10 sales from across the company’s Squadron flybridge motoryacht and Targa express cruiser ranges.

“Sales continue to grow in Australia,” said Bryan Jones President of Fairline Asia, “across the region we are up nearly 600 per cent annually since 2008.”

The Company’s latest icon, the Squadron 50 will be delivered to Australia by mid-2012.