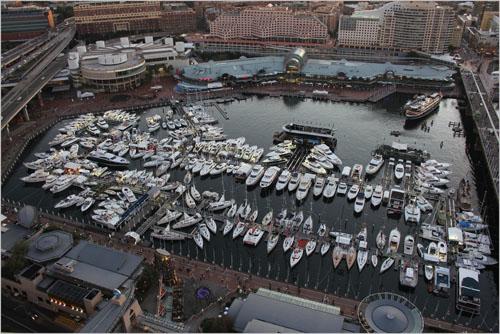 The Boating Industry Association of NSW (BIA) has confirmed that the 2013 Sydney International Boat Show will be on at Darling Harbour. This follows Infrastructure NSW delaying the commencement of the venue’s redevelopment to the end of 2013, allowing next year’s Sydney show to go ahead as planned in August.

The NSW BIA said it had been no secret that it has been looking for an alternate venue for its Sydney show since the NSW government announced the start of $1 billion redevelopment of the Darling harbour precinct next year. The Sydney Convention and Exhibition Centre (SCEC) closes from the end of 2013 to 2016 and the Sydney Entertainment Centre demolished.

Once complete, the size of the Sydney International Convention, Exhibition & Entertainment Precinct will have increased by two-thirds to 20 hectares, and undercover exhibition space to 40,000m², a rise of 13,000m² on the current facility.

“We are excited at the long-term prospect for the industry once this facility has been completed,” said BIA general manager Roy Privett. “We are also fortunate that Infrastructure NSW has been working directly with the BIA for almost six months now to ensure that we have an interim facility during the construction years of 2014 to 2016 to ensure the Sydney Show continues.”

As a further commitment to the Darling Harbour precinct, the BIA has entered into a 10-year agreement with Walcon for the supply of marina walkways and installation of added infrastructure to allow for the expansion of the marina exhibit.

The BIA’s board of directors recognise the likelihood of a split show over the redevelopment years, but have vowed to ensure that both marina exhibits and undercover exhibits will run concurrently. Infrastructure NSW, it said, has proposed some excellent opportunities as interim facilities and is currently working with the BIA to see which is most suitable to meet both the exhibitors’ and visitors’ needs.

An announcement about the Sydney boat show venue for 2014 to 2016 is expected mid-year.

Photo: The Sydney International Boat Show returns to Darling Harbour in 2013, following a delay in the start of a major redevelopment for the entertainment precinct.