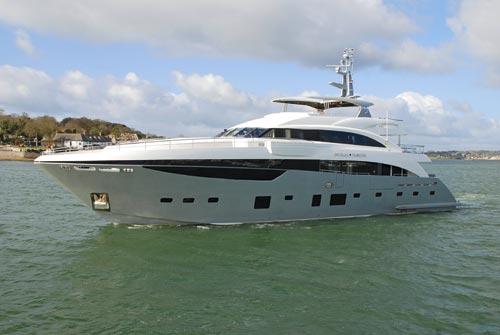 There were exciting times for UK motorboat builder Princess Yachts mid-March as the first of the new flagship — the 40M — emerged from the yard’s sheds and went for initial sea trials in Plymouth Sound.

Sporting the name Imperial Princess, the yacht had many parts still wrapped in protective coverings, and she is not quite finished yet. However, the sea trials apparently went without a hitch, and more than that it gave us Euro boaters our first chance to see the yacht in the flesh, on the water.

With accommodation for up to 12 guests, along with quarters for eight crew, she certainly fits comfortably in the superyacht bracket, and offers a stark contrast to the new baby of the Princess range, the V39 which was unveiled in January.

The 40M’s sleek lines and two-tone paint scheme — grey for the hull and the sundeck hardtop, white for the superstructure — certainly combine to make her a very pretty yacht indeed.

“It is not until you see her on the water for the first time that you realise just how beautiful she is,” commented managing director Chris Gates, who was onboard for the sea trial. This first 40M is due to be officially launched in April — look out for more news soon.