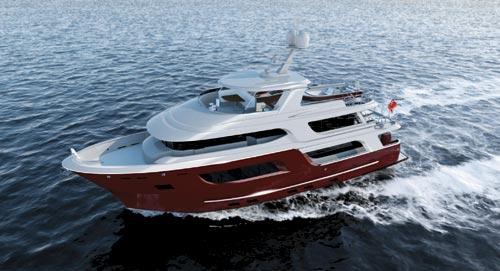 There are boats and then there are the kinds of vessels built by Northern Marine. I don’t know about you blokes, but this Stateside journalist has a very soft spot for this kind of beefy, no-nonsense, industrial-grade kind of build.

During a recent visit to the Pacific Northwest city of Anacortes, Washington, I happened to visit the builder’s facility and had a look at the beginnings of something very special.

Promising to be a spectacular addition to Northern Marine's family of expedition yachts, the 85ft Blood Baron is rapidly becoming a reality. Since construction began in October 2011, the hull is laid and interior construction is well underway. Utilising an extremely efficient modular building method requires precision calculations, but it's speeding Blood Baron's progress along.

The lower deck's four complete staterooms are being built on the shop floor and will be craned into place once nearly complete. Rough-in framing, ceiling grids, insulation, piping and cabling are already finished. Work now progresses to the interior staircases and furniture bases. This deck includes a VIP stateroom with king-size walkaround bed, two queen guest staterooms and a crew cabin, all with en suite heads.

All plumbing, flooring, furniture and fixtures will be installed prior to placing the modules into Blood Baron's hull. The pilothouse, flybridge and skylounge will be built in the same way — down to having the pilothouse dashboard and furniture in place.

While extremely large craft such as cruise ships often utilise modular construction, it's unusual for custom yachtbuilders. This allows the company to completely tailor to an owner's desires more efficiently.

Efficiency and safety are the big rewards of modular construction. Craftsmen walk up two stairs to the staterooms, instead of three flights. Tools and materials are nearby, readily accessible. Plumbing installs under the floors, instead of being worked through spaces within the hull, and all fairing will also be done on the shop floor instead of having someone in a lift and a safety harness 20 to 30 feet in the air.

Blood Baron will be powered by a single 600hp Caterpillar C18 engine with a top speed of 13kts. Her range will be 5750nm at 10kts. An extended superstructure brings the pilothouse aft to create a panoramic skylounge with a bar and home entertainment centre, while maintaining space for a stateroom behind the wheelhouse. Its expansive glass wall with sliding doors opens up the aft deck for outside dining.

The main deck features a country-kitchen style galley and great-room dining area. A spacious flybridge has storage for a 17ft tender, PWCs or motorcycles, as well as a lounge area with spectacular views.

This is the kind of boat that is quite capable to making an appearance Down Under and then some.