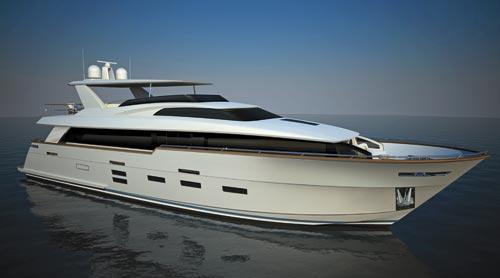 If you happened to be at the Miami boat show at the end of February, you might have noticed a new addition to the Hatteras range of yachts, the 95 Raised Pilothouse. The name is perhaps a little misleading, as the yacht actually comes in at 99 feet, but the key to this new addition is the styling — and who better to turn to for a modern refresh than the Italians.

Enter Team For Design — by Enrico Gobbi, who took up the challenge to create a new breed of Hatteras, and introduced flowing lines and a sleek, purposeful profile to the raised pilothouse design, which will form the new flagship of the Hatteras range.

“It really takes you back to the motoryachts that helped establish us in the 1990s, old Jack Hargrave boats,” says Eric Cashion, marketing director for Hatteras. “We want to take that DNA and take it a step forward.”

The hull shape itself is based on the geometry learnt while working with Hargrave, but with updated sheer and stem. “From there it’s brand-new going up,” says Cashion.

It is not just the styling which has taken a modern Italian turn — the ethos of the model is also up-to-date, offering purchase and running costs suited to the current market and acting as a spear to penetrate some of the new, burgeoning markets where pocket superyachts are growing in popularity.

The standard layout will comprise an American galley on the main deck level, with a full-beam master suite, two twin cabins and a VIP cabin on the lower deck. There is also an option for a master suite on the main deck forward in place of the country kitchen style galley. The standard engine package will be CAT C32 diesels, and the first of the models is due for launch in the summer of 2013.