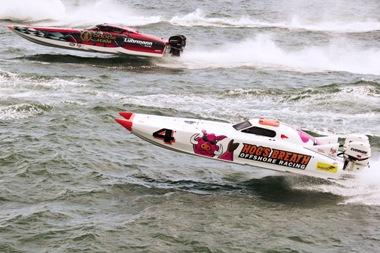 The Australian Offshore Superboat Championships will kick start its season on April 21 at Newcastle Harbour.

Up to 15 superboats weighing close to four tonnes and capable of reaching speeds of more than 200km/h will compete across three categories: Supercat 1000,Supercat 600 and Supercat 400.

Offshore Superboat President Adam Gilbert says Newcastle is the perfect location to commence the season because it provides a challenging circuit for all competitors.

“Newcastle will again feature fast paced and exciting racing conditions for competitors and spectators. It provides a real challenge with a mix of big swell and rough seas off the coast, with calm waters within the harbour.

“This is a great place to start the season and the weekends racing will give us a good idea of who will be challenging for the title,” Gilbert said.

The championship event will coincide with the foreshore festival Fuelarama, which helped the meet attract over 40,000 spectators last year.

"Fuelarama was a huge event in Newcastle last year and it’s a great addition to this Offshore Superboat Championship round."

This year’s competition is expected to be fierce.

In Supercat 1000 class, reigning champion team The Good Guys led by brothers Brendan and Christopher Frier, will fight to hold off four other competitors in the category, following an extremely successful campaign in 2011.

All eyes will be on Main Lube Express following its transformation over the off season from a Class 1, 150mph race boat to enter Superboat 1000 class in 2012. The boat shed 1000kg, and will compete with Mercury 525 EFI race engine package.

The SUV Dodge Ram, in the Supercat 600 class, recently underwent a makeover ahead the Newcastle meet, and is fitted with the latest electronic displays from Garmin.

BBC Digital has finetuned its 2.5L Offshore Mercury engines, while Kwozzy 2 returns to the water a brand new Twin Mercury 300XS engines airfreighted from the US.

In the Supercat 400 class, the M.A.D Offshore Race team are keen to win back to back titles after their Championship victory in 2011. While FGI, Number 8 Racing, Shaken Not Stirred and the new entrant, father and son team Gryff and Mick Ethell, will be keen to finish with a podium result in the debut race.

The fast paced action will kick off on April 21, with a pole position shootout from 1pm. The main race will get underway between 11:15am and 12:15pm on Sunday.

The City of Newcastle and the Offshore Superboat Corporation are giving one lucky person a chance to experience the action from the front seat of a lightning fast superboat in Newcastle Harbour.

The Offshore Superboat Championship would like to thank the Newcastle Council, local members and sponsors for their support for this event and Fuelarama.