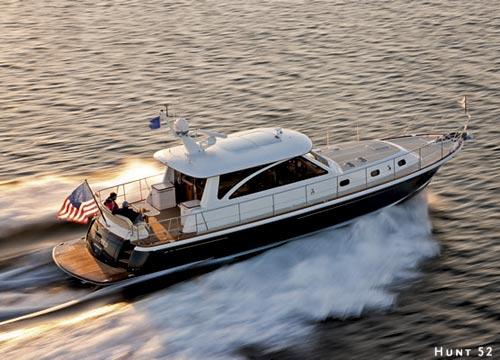 NEWS - Hunt Down Under

Hunt Yachts, a US designer and builder of luxury classic motoryachts, hard-bottom inflatables and express cruisers up to 72 feet, appointed Barry Bailey to its international sales team. Based out of Queensland, Bailey will be the company’s Asia-Pacific regional representative, concentrating on new and brokerage sales.

“Based on the global popularity of the Hunt line and our capacity to design recreational, commercial and military boats, we are excited about focusing in this market,” Hunt president Peter VanLancker said in a statement. “Barry’s experience and knowledge of the yachting clientele in the region will be valuable assets to raise our profile, build the Hunt brand and drive our expansion plans in this growth market.”

Bailey is a yacht sales executive with nearly 30 years of experience in the marine manufacturing and retail industries. As co-founder of Maritime Consultants & Management (MCM) in Hong Kong, he handled large-yacht construction and management contracts worldwide. Through MCM he formed an affiliation with Brunswick Corp as a sales and marketing consultant, identifying and establishing dealers throughout the Asia-Pacific region for the Sea Ray, Boston Whaler and Baja brands.

This eventually led to his appointment as the company’s Asia-Pacific manager of operations in 2000. Prior to joining Hunt Yachts, Barry spent the last four years handling international sales for Cobalt Boats, Grady-White and Sumerset Houseboats.
Originally from Washington, Bailey has been in the Asia-Pacific region since 1988, having settled in Australia in 2000. He is a licensed captain who has successfully circumnavigated the globe twice on traditional wooden sailing vessels. If you happen to be in the neighbourhood, why not stop in and say g’day to Barry and tell him Capt Ken sent you.

Photo: We should be seeing more boats like the Hunt 52 Express Sedan, with the appointment of Barry Bailey as the US boatbuilder’s Asia Pacific rep.