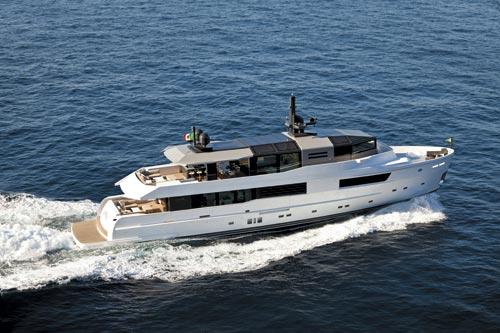 There’s an old proverb about glass houses and throwing stones, and it was fortunate for Italian builder Arcadia Yachts that few threw much of anything at the radically styled Arcadia 85 when it was launched a few months ago. Combining ultra-eco design (okay, perhaps that’s a little strong — it is a yacht, after all) with modern interior details, the 85 was viewed with much curiosity by those of us hereabouts.

), an extended version of the 85 complete with an additional upper deck. Many of the radical styling cues remain, including the angular, dark glass superstructure elements that appear to be Bond, stealth and greenhouse all rolled into one. They do serve a purpose other than just pure styling, however — the glass contains photovoltaic cells to provide additional electricity to the yacht.

The 115 may look a little unusual — certainly compared to the classic sleek Italian stallions we are used to seeing — but the interior spaces are superb. Further, Arcadia is not afraid to rethink certain elements (in case you hadn’t noticed), so the foredeck on the 115 has become a guest area, complete with spa pool and sunpads.

The interior of this first model, part customised by her owner, features an impressively modern ambiance and some superb social spaces. The upper saloon, behind the modern bridge, is slightly truncated, forming comfortable sofas pointing toward a giant screen on the aft bulkhead. The aft half of this deck is used for outside dining and seating, while those who fancy a view underway can sit on the bench sofa in front of the wheelhouse on the Portuguese bridge area.

The main deck features an aft saloon with dining area at the forward end — complete with fold-down hull balconies on either side — while the forward area is given as a full-beam master suite. The lower deck includes a full-beam VIP amidships, two further guest cabins (there is also an option for four guest cabins on the lower deck with no VIP), and crew cabins and the galley forward.

Twin MAN diesels should propel her to a top speed of around 19kts, but in line with Arcadia’s green ethos a super-efficient hull form allows for a range of up to 1700nm at a lower cruising speed — something that would be entirely alien to many owners of yachts this size.

Also alien will be her looks, but the style and space of her interior should mean that her exterior styling soon takes a back seat when you are onboard. And anyway, aspersions from other owners on her looks would simply be jealousy. What was that I was saying about throwing stones?