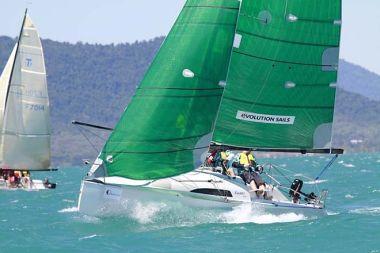 Now in its sixth year, Sail Port Stephens will run from April 16-22 and is expected to attract over 170 boats to its competitive field.The Elliott 7 Class chose the regatta for its championship program due to its reputation as a well organised and popular event, set in a prime, convenient location.

The Elliott 7 Class has grown strongly in Queensland, from a firm base in NSW and the ACT. There are Elliott 7 fleets in Melbourne, Perth, Griffith and Lake Macquarie in NSW.

"We expect Port Stephens to be the best Australian Championships yet. The class continues to build momentum and recent developments, including carbon booms and poles as well as the adoption of a new square top mainsail profile, has ensured the class maintains its status as the largest one design sports boat class," says Primrose.

Mike Green, multiple Sydney Hobart winner and current Australian Sports Boat Champion, will be competing in the class as the current holder of the Elliott 7 National title. Green has previously won at Sail Port Stephens.

“I sailed at Sail Port Stephens two years ago aboard Bob Steel's Quest when we won the IRC Racing Division, and now I am looking forward to our Elliott 7 Nationals with Evergreen,” says Green.