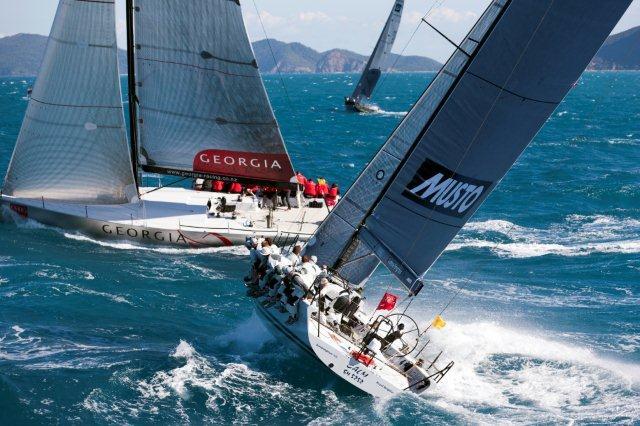 Farmer, an Auckland-based Queens Counsel and highly successful ocean racing yachtsman, lodged the entry for the impressive 52-footer, Georgia, five months before the start of racing in August.

Georgia was the 25th entry in a fleet that is expected to be near 200 when entries close in early August, and while hers is the first to be lodged for the Grand Prix IRC Division, the Cruising Yacht class is showing the way with 19 nominations at this early stage. The entry list is expected to grow into the 30s this week, a number that is satisfyingly more than at the same time in the lead up to last year’s regatta.

Georgia was so dominant at Geelong that she did not need to start in the final race to claim the Grand Prix title in an event dominated by 52-footers. She won by 12 points from Jason Van Der Slot’s Calm on 21 points and Rob Hanna’s much touted, Shogun V, which was third on 24 points.

These changes have taken Georgia into a new league when it comes to performance, so much so that she could well be the boat to beat in the Audi IRC Australian Championship, which will be part of Audi Hamilton Island Race Week 2012.

The sailing and party agendas being developed for Audi Hamilton Island Race Week 2012 promise to take what is Australia’s most awarded regatta to an even higher level of satisfaction on all fronts.

Competitors, their families and friends who book Race Week accommodation before April 30 will receive the ‘Early Bird’ bonus – a 10 per cent discount at the impressively upgraded Reef View Hotel and also the Palm Bungalows.

For details of this offer, and all other information relating to Audi Hamilton Island Race Week 2012, go to the regatta website – www.hamiltonislandraceweek.com.au. The Notice of Race and Entry Form are also on the site.

The regatta caters for the full spectrum of keelboats – from non-spinnaker cruising yachts and sport boats through to Grand Prix level racers and high performance multihulls.

Luxury carmaker, Audi, returns as the main partner of Hamilton Island Race Week in 2012. The German premium brand offers a range of high-end events on the island for yacht owners and guests to enjoy during the week.