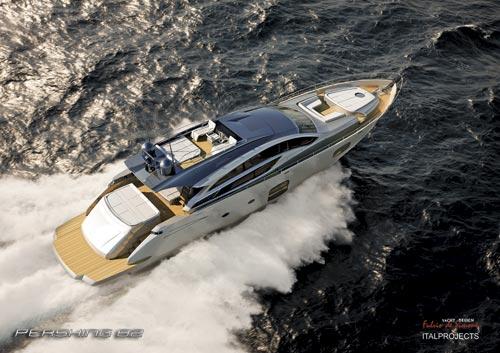 While the winter (and boat show) blues may still have their grip on us Euro-boaters, there is at least something to look forward to — spring. Because with the arrival of spring will come the latest Pershing to emerge from Italy, in the form of the Pershing 82. Described as “a contemporary reinterpretation of its successful predecessor” — the Pershing 80 — the new 82 comes from the boards of Fulvio De Simoni, who drew her lines in collaboration with Ferretti’s Advanced Yacht Technology group (AYT) and Centro Stile Ferrettigroup.

The styling is said to be sleeker and more aggressive than the 80, thanks to wider windows that can also be opened. The sundeck area features its own special touch of tech, with access coming via a specially developed carbon steel stair that drops and raises by electro-hydraulic control — the aim being to limit the intrusion on aft deck space when the sundeck is not in use.

Accommodation layout follows the standard form, with a large master amidships, VIP cabin forward and two guest cabins between them, plus a lounge/cinema, and two cabins for three crew. There is also the option for a three-cabin layout.

Aside from a decently equipped aft cockpit, there is further seating and a dining table on the foredeck, although with the throttle flat down you might not want to be up there too long — performance goals are for a max speed of 45kts thanks to twin MTUs and ZF surface drives. Cruising speed is expected to be around 40kts.

Of course, one can’t talk about Pershing without mentioning the big New Year story around the marque’s parent company, the Ferretti Group. It was confirmed early in January that the SHIG-Weichai Group from China had acquired a controlling interest in the Ferretti Group, taking 75 per cent for Euro 374 million, which includes an equity investment of Euro 178 million and provision of debt financing of Euro 196 million. Existing creditors — RBS and Strategic Value Partners — will acquire the remaining 25 per cent interest with a Euro 25 million equity injection and a debt to equity swap. The move bodes well for the future of the mark, which will retain its key management team in Italy along with its headquarters and production bases, with China representing a considerable potential growth market for the brand. — Tim Thomas