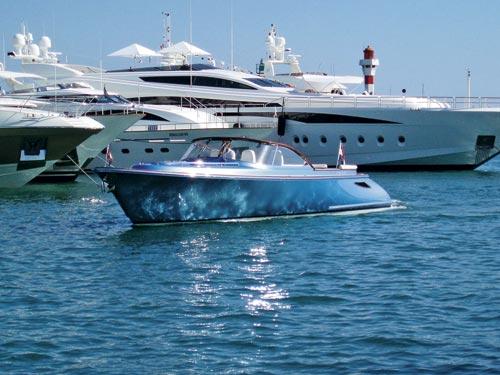 The French Riviera, the Cote d’Azur, the South of France; it all sounds so glamorous and evocative of luxury living and a world of sophistication so detached from our own simple lives. Mega yachts, movie stars, and five-star hotels perched on a cliff overlooking the glittering Mediterranean Sea. What could be better? Well, throw in a boat show and it is right up there with the best.

Cannes (correctly pronounced Can and not Carne) is one of the showcase towns of the Riviera and the set for the annual film festival that attracts all the Hollywood types et al. The main promenade has every imaginable luxury shop such as Cartier, Gucci, Louis Vuitton, etc, with other dedicated shoppers prowling every other European fashion house for retail therapy.

Having collapsed out of yet another restaurant, my beady eye spied a sign Festival de la Plaisance, with jaunty little jousting tents arranged around the historic port. Ooooh, a boat show! I quickly ditched my travelling companions and sped back to the show for six hours of wandering aimlessly under bright blue skies.

Europeans, particularly in this neck of the woods, are particularly interested in looking stylish and basking in the sun; a sun that is bright and beautiful but seems to have far less bite than ours. As a result, the style of motorboat is of the typical Euro sportscruiser with huge sunpads fore and aft, and anywhere else they can cram one in.

GOLD’N TANS
Seductive women and men glisten with sun oil, violently expensive jewelry and the Colgate ring of confidence. Meanwhile, on the main beach, selected and gated sections allow equally glamorous patrons of the swish hotels to bask in the golden light.

Everything looks fast and stylish. If you are after a trawler, fly to America. Over here it is Riva, Benetti and Ferretti — big power, fabulous tenders and superyachts with multi decks and white uniformed crew.

One couple who clearly had no intention of dealing with queues at the main gate, arrived to the historic port in a very smart black helicopter, and heaven forbid the 300m walk, were collected in a very large black Bentley. Now there was an arrival. They had probably only come from a house on the hill but “darlink, we don’t do traffic!” Welcome to the Riviera.

Everyone is on exhibit from rubber ducks to big maxi yachts, super-smart speedboats to superyachts. Unlike our shows, where there are a few models, they have the lot. Beneteau had every model in a 30-boat display. Riviera had six boats. The only component missing was the gamefishing boats as Europeans subscribe to my theory that “the best fish is on a menu”. God forbid that one would fight with dinner! However, for port hopping and stylish living in the sun, with the odd refreshing dip into the crystal waters, they have a boat to suit your needs. Some are most odd and show an eccentric nature that only comes with real wealth.

I saw a huge Pirelli inflatable tender of about 20 feet, with an amazing stylised hardtop that was just about the best inflatable I had ever seen. That was until a 60ft hard-bottom ‘inflatable’ tender with twin MTU V12s motored past — 30 guests onboard! The amazing thing was they took many of the exhibit boats out on test drives, and presumably took orders after the test. Boats were whirling about the place the whole time. It was simply alive with action.

TRADITIONAL TO ECCENTRIC
The conservative fleet is still in there, such as the Grand Banks, Flemings and Viacem classics, along with a few replica yachts of days gone by. The standouts are the really eccentric boats from Wally, Leopard, and Palmer Johnson - the PJ being a gold-sprayed missile of sinister appearance. One waited for Mr Goldfinger or Shirley Bassey to glide out onto the aft deck.

There is also a prevalence of yachts here; far more than the US shows. An afternoon sail along the coast seems rather pleasing, with relatively calm seas and intimate coves for a light lunch and perhaps a nap. Buy a catamaran, a Jeanneau or a Perini Navi superyacht with hydraulic winches. The world can be your oyster if you have the cheque book or a black AMEX.

RED CARPET RIDE
There is no getting lost at Cannes, despite the size of the event. Entering and passing through the first hall of static exhibits, one simply follows the red carpet along a path of boating heaven. Engines, gadgets, dinghies, toys, yachts, speedboats and cruisers are all readily available for inspection, perhaps not as easily accessible as the US shows, but if you can push past the language barrier, you are in, or on, as the case may be.

It is worthwhile being pushy as there is a lot to see. About 480 boats. They all speak English if you announce you are Australian. English is the language of money, corporate life and aviation. All you need is confidence, a little bravado and perhaps a big Rolex.

Of course, entry into the big league of superyachts requires a certain style and panache and it is quite apparent who the owners are. Extremely expensive and wonderfully manicured trophy wives glide in stiletto heels past their handsome crew, whose fingers are to the bone, polishing and preening madam’s sunbed for another afternoon languidly stretching in the sun. Who could raise the energy to get a drink, and that is why they invented crew. Silly you!

The new trend is for black uniforms (it shows off the gold epaulettes better) and they are all models and stud muffins while probably some ugly, old humpbacked wretch is down cleaning the bilge or ironing pillow cases. And who said there was no class system?

All this sounds quite ridiculous, but it is absolutely not. It is a flavour of a culture and society that is very well worth a visit. Who would write this article for a boating journal and dismiss the boats as second best, but I would strongly recommend that you visit one of these shows and enjoy the theatre of it all. Quite intoxicating. Just don’t slip into a six-star hotel for a drink as it can be alarmingly expensive. I had a delicious piece of fish for $148 plus salad. Thank heavens the champagne was only $63 a glass. Four hundred later, could I care less. Slip into Cannes. It was quite wonderful.

Check out the sunbeds aboard this Wally motoryacht

Bronze styling and low profiles were apparent trends at Cannes

The Sakata's custom designed garage appealed to our roving reporter

The stylised hardtop adds a new dimension to this Pirelli inflatable