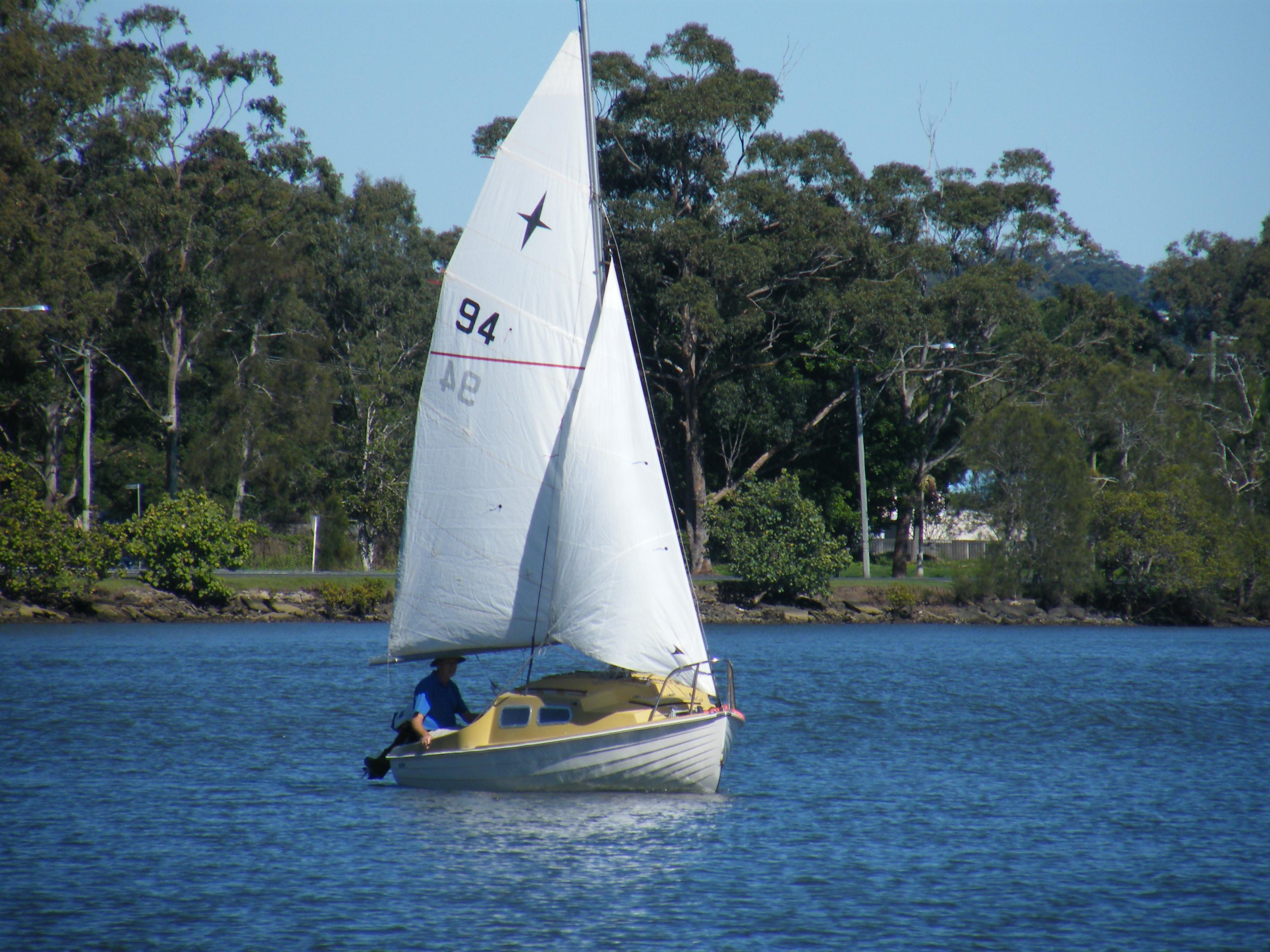 One Man's Boat - Whisper to Me

The Botterill Explorer 16 is a great, little trailersailer. Just ask owner JOHN TIMMERS, who says the honeymoon is far from over

I have this inner voice. I hear its persuasive words at boat shows, camping outlets, Bunnings, electronics: “Go on… you know you want it John. It will be good for you, enjoy the ride.”


Some people imagine a little red devil on their shoulder, mine’s more like a Leprechaun… today, in sailor blue. I studied the emails again, my little mate was most insistent: “This is it John, this is the one.”

BOTTERILL BEAUTY
I had pored over the emails. The pixelated photo distorted her fine clinker construction.
But nothing could hide the classic design. This was the Botterill Explorer 16, yellow-ochre topsides and white hull.

This was the shapely 1960s design I had admired for years. First in Canberra, when my brother got one — I had a closer look. That little voice again: “Go on John. It’s everything you want. Why should he have all the fun?”

I’d had a bigger yacht before, fixed keel, moored in the harbour, with all its drawbacks. And the costs! The Explorer was so much smaller. “It’s just a little boat, to be sure, but what would you be doing with a big boat then?”

THE JOURNEY
Our search took 18 months to find Ray’s Explorer. We had tried all the adverts, Trade-a-Boat, internet… but with a production run of only 150, and mostly in the 1970s, this rare little creature was hard to find.

Each boat has been numbered,” Ray explained slowly, “and this was the 94th to be built.”

Google found the Explorer 16 Association. They heard a boat might be available in Noosa, so I contacted, feeling hopeful. Ray replied. He still had his pride-and-joy, and in good condition, too. His photos and asking price looked attractive. The leprechaun was overjoyed.

The Explorer had a reputation to live up to. She’s light and easy to tow, low-maintenance fibreglass, no antifouling, no harbour fees, and she looked such a dry, little yacht. The Leprechaun was in my ear: “You’ll love it mate, and you can add improvements in your workshop at home.”

GREY SAILOR
I was two years from retirement and thought I’d become a grey nomad with a difference. Pull the boat around Australia and sail at every possible boat ramp. This appealed to my quirky sense of adventure. You can circumnavigate Oz in a16-footer (by land).

We met Ray halfway between Coffs and Noosa, at a boat ramp on the Tweed. When I saw her sitting on the trailer, she looked pedigreed behind Ray’s BMW. “Isn’t that what I’ve been saying, John?” But the colour was, as I’d secretly feared, nappy-yellow.

“Yeah,” I laughed weakly, “It’s like our old Kombie. Only that was nappy green.”

Introductions made, Ray followed me to his boat. She was spruced-up for the sale. Little smudges of white polish still remained around the windows. The yellow ochre had thankfully matured with age to a pleasant buff, and was complemented by brightly varnished wood. I turned to Ray, “Looks great. You’ve really looked after it.”

I climbed into the cockpit and unlocked the sliding hatch. I hauled out five bags of sails and heaved them over the side. “Heavy-weather jib and main,” Ray called, “light weather, too, and a spinnaker. It’s all here John.”


LOVE BOAT
The little boat now started talking to me now, in soft whisperings: “I’m pretty as a peach, I’ve got the sweetest underwater lines.” I was hooked.

I pulled an envelope hastily out of my pocket. “It’s all here, Ray, the asking price, now let’s get her into the water.”

"When the white caps form, she lifts her skirts and frolics"

But I pressed the money into his hand, too excited to haggle. “We lived in Canberra in the mid-’90s, Ray and saw one of these beauties on Lake Burley Griffin,” I enthused. “Same colour. We swore we’d get one day. She looks great considering she’s 35 years-old. A real classic.”

“Canberra?” Ray grinned at me. “What a coincidence. We lived in Canberra in the ’90s. So this is the one,” he gestured proudly to the boat.

“My little Explorer! She was the only one there!” He then told of his first look at an Explorer. “It was in the 70s,” said Ray. “I was crew on a 25-footer at a regatta off Sandringham, Port Phillip Bay. We were racing in the middle of the pack with a strong breeze.”

Ray gazed into the distance with his memories. “And out of the blue, this cheeky little 16-footer raced past,” he continued. “We couldn’t believe it! Just had to find out what it was. A group us got together after that, bought one each, and the Explorer Club was born. It’s a fast little boat John. And safe.”

Ray had unfolded each sail onto the grass, an inventory with all the other bits out of the little cabin, to impress upon me the correct way of folding and stowing it all back. He still referred to the little yacht with deep affection as she, or boat. “Does she have a name?” I asked, puzzled.

“Yeah, course, Explorer 94.” He seemed a little put out. “Each boat has been numbered,” Ray explained slowly, “and this was the 94th to be built.” He then told me he was an engineer, and that explained things. But to me she had such personality; she whispered to me, so we would find her a lovely name.

The rigging proved nice and simple once that tall mast was erected. We stood back and she looked perfect. Ray backed the trailer into the water.

TWO STROKES, TOO MANY
I have never enjoyed two-strokes. Stubborn lawnmowers haunt me. And dad’s new Johnson 9.9 in 1960 needed more pulls than a good set of oars. He never did get the oil mixture right.

Now my fears were reinforced. This Explorer had a ’76 Johnson with a broken bracket. It started… eventually, but not without protest. “Your first replacement, John. That’ll be fun.” Damn leprechaun.

We soon had the sails up and she was away. It was only a light breeze and still she moved willingly. Larger yachts were plying the broad reach of the river, too, in the deeper channel, all of them motoring. But we sailed closer to the mangroves on the opposite bank in shallower water.

The scenery had stopped moving. We had gently ground to a halt. Ray winched the keel up a few turns and I simply tacked back. So safe and simple.

The breeze strengthened. She sailed beautifully and heeled slightly. That 100kg keel would be a winner. I could forget my wife’s panicked warnings: “Oh !@#$, oh !@#$, oh !@#$.” Her estimate of 35 degrees of heel in the last yacht. I smiled at the memory.

I felt an unexpected pleasure. We were pacing the larger yachts, and with stronger gusts we sailed even faster. And she had quick response to the tiller. She whispered: “This is sailing, John. Relaxing and exciting.”

I wanted to retrieve my boat behind my car but the leprechaun wasn’t finished with me just yet: “Not an easy task mate, you can’t even back a 6 x 4 box trailer, let alone an empty boat trailer down a boat ramp.”

I hooked it up anyway. Despite the instructions and arm wavings I managed to back into the water at a funny angle. This backing-up stuff needs practice.

Pleased? That doesn’t describe the elation and joy I felt. She was everything I could want and as I looked over at Ray, I saw that he, too, enjoyed his last sail. But it must have been hard for him to let her go, his No.94.

I was already making plans. I had budgeted $10K or so. And I had enough left over for a new four-stroke outboard, a GPS-chartplotter, replace the plastic gunwale strip with wood, new trailer wheels, new compass, new radio, projects…

Within a week we had named her Whisper.

COINCIDENTALLY
A year later we sailed from Urunga to Mylestom, just south of Coffs Harbour. I had left Whisper tied up at the pier. We climbed the grassy bank for a picnic and a stranger was looking intently at our little Whisper as she gently nudged the poles. The man walked back and forth, looking around and waiting. She was unlocked and open, so I quickly joined him.

He bubbled with excitement. “Great little boat!” he began, “I sailed in one of these years ago. I knew the Botterill family, you know. Great people. Often sailed with them.

“Then one day, close to Sandringham, near Melbourne,” he raised his eyebrows, continuing, “well, we just raced past a regatta of big yachts. Left them in our wake. Jeez we laughed!”

ONE OF THE FAMILY
It’s been two-plus years. We’ve sailed five trips from Hervey Bay to Fraser Island in all sorts of weather, sailed ocean swells to the horizon at Coffs, and in the twin rivers Kalang and Bellinger from Urunga to Mylestom. So many delightful adventures. We’ve had the company of a huge whale for 20 minutes, cruised with pods of dolphins, dodged drum-sized jellyfish and observed a sea-cow and turtles. When the white caps form, she lifts her skirts and frolics.

And it’s when I feel the movement of water through the tiller, hear the gurgle of the rudder, see white foam flashing past and the sails drawn white against a blue sky. She whispers to me.

1.
Test sail on the Tweed
2.
Only a little cabin, to be sure. John Timmers aboard Whisper
3.
Hoisting sail for the very first time
4.
A big shove to get it off
5.
As awkward as it looks
6.
Off the beach at Fraser Island
7.
That’s hard work, Ray
8.
My boat behind my car