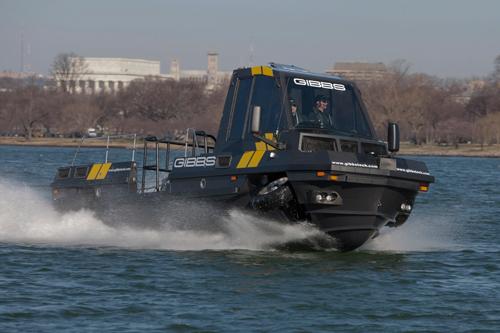 Amphitrucks capable of travelling up to 130km/h on land and over 60km/h on water were launched in Washington, USA, this month.

US military engineers and invited guests were the first in the world to see the Phibian in action at an event preceding the American Society of Naval Engineers (ASNE) annual conference.

Gibbs Technologies is the world's only developer of road legal high-speed amphibious vehicles for consumer, commercial, military and first rescue use.

Richard Branson was travelling in a Gibbs Aquada when he set a new record for crossing the English Channel in an amphibious vehicle in 2004, reducing the time by over four hours.

Since then, Alan Gibbs has focused on further developing his HSA technology which is the result of 15 years, and more than two million hours of engineering time.

It has been developed for general transport, search and rescue and law enforcement operations.

"When conducting search and rescue missions, whether it be for an individual or following a natural disaster, time is of the essence," says Gibbs.

"A vehicle that can perform as well as a multi-terrain vehicle on land while reaching planing speeds on the water means that response will be significantly faster and more seamless."