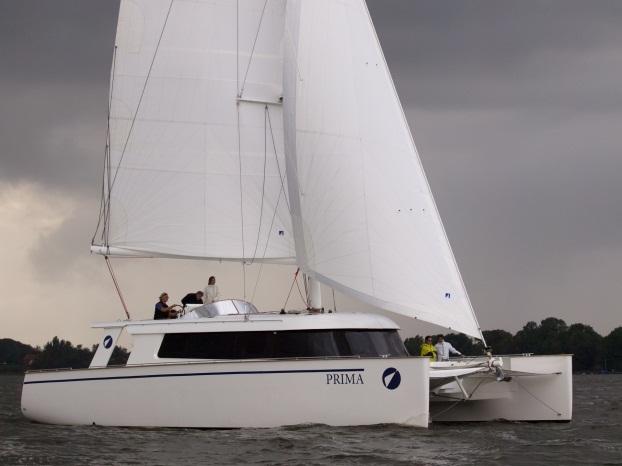 Compared with monohulls, cruising catamarans have the advantage of stability and speed, but a big disadvantage of a wide beam is the restriction to marina berths, where you’re likely to be banished to the outer arm or a swing mooring.

Denmark’s Quorning Boats (distributed here through Team Windcraft) found the answer with its SwingWing range of trimarans, where the floats fold along the hull’s sides thereby gaining a ticket to a standard berth, a trick catamarans couldn’t do, until now.

German builder Futura Yacht Systems reckons it has found the answer with its variable-beam Futura catamaran that reduces its width from almost 8m to 4.8m.

Designed by Judel/Vrolijk & Co, the Futura was launched at last month’s boot Dusseldorf boat show showing off its beam-shedding ability.

A press-button operation, it apparently takes only a minute for the hulls to slide in or out from under the central platform, where carbon-beam structures and lock-free bearings starboard and portside are powered by two 24V electric motors fore and aft.

The patented process is claimed to be friction-free, the carbon beams sliding in a high-pressure compartment with freshwater, which enters the bearing when the motion starts. The mechanism can also be operated manually.

Unlike most catamarans, the living areas onboard are not in the hulls but on the central platform. The builder said interior layout design is on the same level without steps, offering a surface area of 40m² with 2.25m headroom and panoramic views.

Layouts can be configured in several versions for the individual owner, or as a charter, houseboat, dayboat, diving base, trawler, etc. The flybridge cockpit has a helm with all lines and the automatic reefing system connected, the skipper afforded “excellent vision”. A second cockpit is situated on the forward deck between the trampolines and central platform and connected to the interior through a central front door.

Sails hoisted, the Futura is said to show good performance. The speed average in 18 to 25kts of wind is claimed to be 14.5kts, while under power the cat does 11kts at 2500rpm from two 40hp Volvo Penta engines.
The builder is quoting a price of Euro 649,000 for the carbon-infused Futura, and Euro 495,000 for the standard epoxy fibreglass model.

As yet there is no word if the cat will be available in Australia.

Photos:
The Futura catamaran hull no.1 has been named Futura Prima and is off for sea trials south of Portugal.