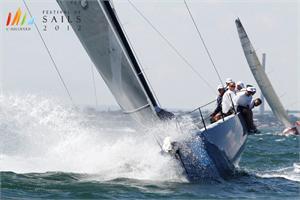 Sunday, Jan 22: Three Royal Yacht Club of Victoria boats have made a clean sweep of the Melbourne Premier Racing Series, the Festival of Sails icebreaker, on a magic summer’s day on Port Philip Bay.

Rob Hanna’s rocket ship, the TP52 Shogun V, blitzed the IRC division A field in its debut Victorian regatta. Shogun V finished the six-race series with the perfect scorecard of five firsts after their worst result, a third, was dropped.

“Today was a better day,” said the winning skipper. “The light-air early on made it hard to put distance on the rest. When the breeze came in at 21kts we were doing 19kts of boat speed.

“This boat’s definitely faster than my previous Shogun, both upwind and downwind. Now it’s about learning to sail it properly,” said Hanna.

Shogun V’s crew has the advantage of having two days to blow away the cobwebs before the Festival of Sails gets into full swing with the Australia Day passage race from Williamstown to Geelong.

“It takes two or three races to get it right, and that can cost a regatta. This IRC series has been fabulous for training and settling in a few newcomers to the crew,” added Hanna.

The two strongest blips on Hanna’s radar for the next stage of the Festival of Sails are Michael Hiatt’s Farr 55 Living Doll, and Jim Farmer’s Botin & Carkeek 52 Georgia. “Living Doll will be hard to beat,” he warns.

The Division B winner was incontestably Grant Botica’s Adams 10 Executive Decision. Six wins from six races meant his worst dropped result was the envy of all — a first.

“Today’s results were much closer,” said Botica. “Everything went right for us, everyone did their job and there were no mishaps. Six races in a fair bit of breeze was a good workout and it’s given us confidence going into the Geelong series.”

Botica is cognisant the field will widen considerably come Thursday and all the way through to Sunday’s final day of racing. “There will be a lot of good sailors at Geelong; we hope we can keep them at bay,” he said.

The Sydney 38 scoreboard was the closest among the podium placegetters, Bruce Taylor’s Chutzpah 38 claiming the victory with a two point advantage over Ian Murray’s Cinquante.

“This series was a great warm-up for us,” said Taylor. “It’s easy to forget how different the Sydney 38 is to my IRC 40, and how different fleet racing is to class racing.

“The racing was so close today, the leader kept changing. Oh, and we managed to keep the swimmers onboard,” he added drily.

The full schedule of six races was completed in ideal conditions, sunshine and southeast breeze, which trickled in at 6kts before clocking left and building to a decent 18 to 20kts.

“It was one of those magic days, and there were quite a few onshore enjoying the action,” said principle race officer Denis Thompson this afternoon.

The remainder of the 300-plus Festival of Sails starting list will gather en masse on Australia Day, this Thursday, for the traditional 34nm Williamstown to Geelong Passage Race, one of the highlights of the extensive water and shoreside program. — Lisa Ratcliff