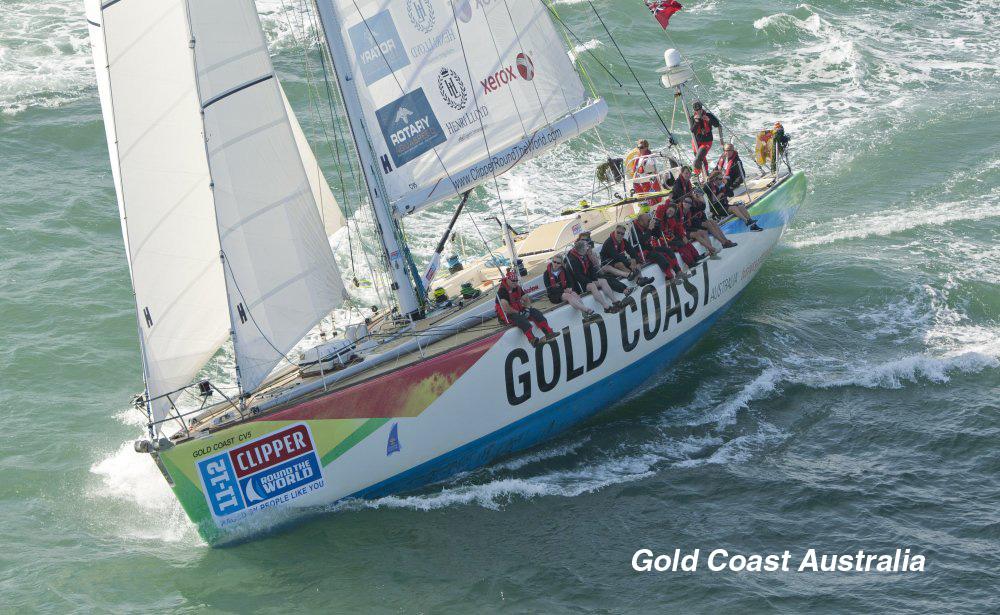 has claimed victory in Race 7 of the Clipper 11-12 Round the World Yacht Race after the Race Committee made the decision to shorten the course in the stage from the Gold Coast to Singapore.

Extremely light winds, which would have prevented the race management team from setting a fair course for the second stage of Race 7, combined with an increased threat of piracy in the Singapore Straits in the light traffic conditions over the Chinese New Year, led to the tough decision. The positions of the yachts at the Celebes Sea Gate, which marked the end of the first phase of the race from Australia, will be taken as the final standings for Race 7.

Race director Joff Bailey told the teams at 0700 UTC today: "Race 7 to Celebes Sea Gate from the Gold Coast was certainly long enough at 3200nm to qualify as a serious race. It was run fairly, you all had chances to make gains and losses and see your tactics play out and I believe it was one of the most interesting races we have run."

During the race the lead changed hands a number of times as the 10 internationally-backed yachts fought for supremacy with Geraldton Western Australia, Qingdao and Derry-Londonderry all taking their turn to lead the fleet. Gold Coast Australia's tactic of heading much farther north than the other nine teams before hooking into a favourable current allowed them to swoop into the lead in the final miles before the Celebes Sea Gate, which has now become the Race 7 finish line.

They beat Derry-Londonderry into second place by just an hour and 19 minutes, and Geraldton Western Australia claimed third place three hours and 15 minutes behind the Northern Ireland entry. Both teams have recorded their best results of the campaign.

Reacting to news of his team's sixth victory of the Clipper 11-12 Race, Tasmanian yachtsman, Richard Hewson said: "Although the race from Gold Coast to Singapore was cut 'short' I believe it was one of the most mentally challenging and frustrating races to date, where any number of tactical decisions could have won the race for any of the 10 yachts in the fleet. Crewmembers on Gold Coast Australia are ecstatic about their victory and we will celebrate in style on arrival in Singapore.

“I would like to thank the other yachts in the race, particularly Derry-Londonderry and Geraldton Western Australia, who sailed extremely well and made the race very close and exciting," he said.

Mark Light, skipper of Derry-Londonderry the entry representing the UK City of Culture 2013, said: "What a fantastic result for us! I am so proud of each and every one of my crew. We have worked so hard as a team and although a long time coming, we always believed we had a podium finish within us. This gives us huge belief for the next race that we can push on and remain one of the frontrunners. For me personally it is a brilliant result: a very close second place only 80 minutes behind the overall leader.

"These races are incredibly hard to win and I would like to give massive credit to Gold Coast Australia for another huge result.

"I will be very proud to lead my team up onto the podium in Singapore to represent the good people of Derry-Londonderry and all who have supported us. Thank you very much," he said.

"What a race! We stormed across the start line and dominated the first few days,” said Coetzer.

“I had decided to push the crew and the boat to the limit and beyond. They responded by giving it their all and working beyond the call of duty when needed.

“I sailed this race using my gut instinct: when something did not feel right, we altered course accordingly and we reaped the rewards. The result of our hard work has earned us a podium position. We have done our sponsors as well as our family and friends proud, not forgetting our supporters following our every move," he commented.

It was a closely fought race, with both Qingdao and Singapore, who were aiming to be on the podium when the fleet arrives in Marina at Keppel Bay, both in contention for one of the top three places. They finished fourth and fifth respectively; Qingdao's result is a campaign-best for the Chinese team, while Singapore's effort moves them up a place in the overall leader board to fifth.

The fleet will now proceed to Batam, Indonesia, where they will muster ahead of a spectacular ceremonial arrival in Marina at Keppel Bay, Singapore on Saturday, January 28.

After refuelling yesterday, Gold Coast Australia is proceeding in convoy with Derry-Londonderry towards Singapore
and they have opted to take a shorter, more southerly route in an attempt to lessen the amount of fuel used and move away from a northerly flowing current.

Continuing to travel in company is allowing the teams to share resources and Qingdao, in close proximity to Geraldton Western Australia and Singapore, is making the most of it.

"We took advantage of the boats being together to steal water from them as our watermaker is struggling to keep up with our consumption in this heat,” said skipper Ian Conchie. “We now have full tanks so we will able to keep topping them up all the way to Batam without any problem."

De Lage Landen and New York have now also joined the group of three and the five teams have been getting reacquainted.

"After getting to the refuel stop early, we met up with De Lage Landen and stopped for a swim for a few hours whist we waited for Qingdao, Singapore and Geraldton Western Australia. It was great to meet up with the other yachts and the crews chatted to each other like old mates," said New York's skipper Gareth Glover.

Stuart Jackson, De Lage Landen's skipper agrees, saying, "We spent this morning with New York having a little swim, whilst waiting for the other boats to refuel. It was great to see all the other boats too and everyone is looking forward to cruising in company."

After a night of stargazing accompanied by Christmas pudding and a glass of wine, Edinburgh Inspiring Capital has been enjoying the company of more than just their travelling companions Visit Finland and Welcome to Yorkshire.

Gordon Reid, skipper of the Scottish yacht, explains: "In the interests of good seamanship, we stop our engines every 12 hours to do some checks and ensure everything is running smoothly. During our brief stop, we pulled up around a boat length away from Visit Finland and just before the sun set, we were considering a quick dip in the cool blue sea.

"Slipping into our tartan budgie smugglers (trunks!), we were just about to take the plunge, when the crew of Visit Finland started shouted, waving and pointing, 'SHARK! SHARK!' Looking over the side there was a huge shark circling the boat, so being very brave we decided against swimming and put our kilts back on," he said.

There is always an opportunity to learn aboard one of the Clipper 68s — even if it's only when not to go for a swim — and Reid and the crew have decided to go back to basics.

"From a navigational point of view, we have resorted to the traditional methods: three point fixes, running fixes, dead reckoning and calculating our estimated positions. For some of the crew this has been an excellent learning opportunity as I have been teaching class," Reid adds.

While seven of the teams have now refuelled three are still transiting the Sulu Sea. Visit Finland, Welcome to Yorkshire and Edinburgh Inspiring Capital are farther behind the others and have slightly different weather conditions.

"We've found some wind! No it's not from the baked beans we had for lunch today, but a real sailing breeze," reports Welcome to Yorkshire skipper Rupert Dean. "Quite how long it will last is anyone's guess, but for us the ability to sail at 8.5kts without using the engine, brings a welcome tranquillity onboard. It also saves us from using our diesel, every drop of which could be precious in the days ahead. So here we are, sailing along nicely with full main, staysail and Yankee 1 across the Sulu Sea."

The first teams are expected to arrive in Nongsa Point Marina, Batam, early next week.