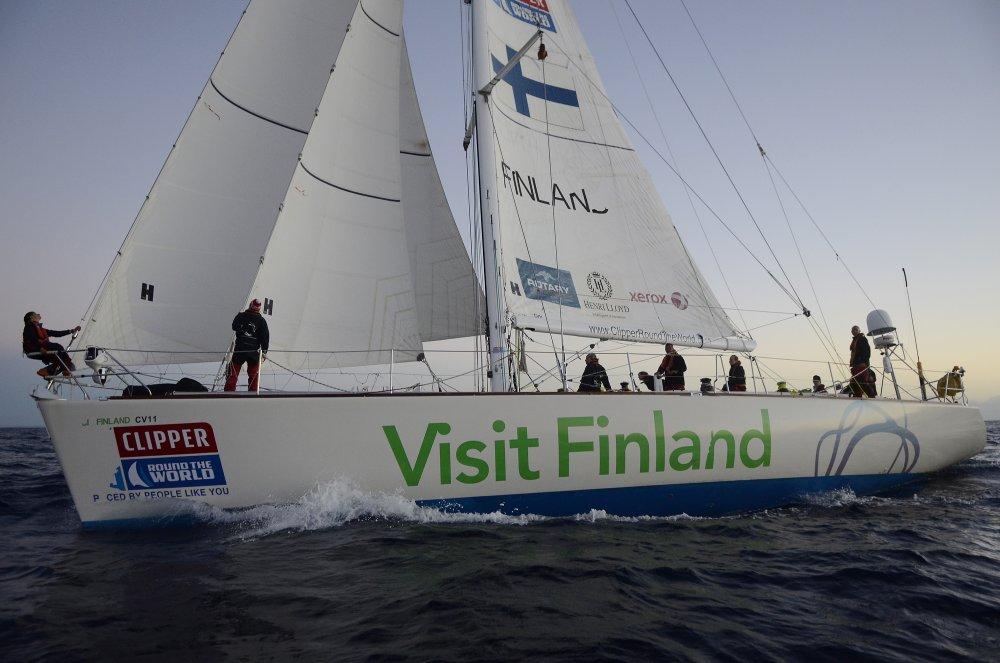 Tuesday, December 13: In a thrilling end to what has been a gripping race from Tauranga, New Zealand, in the Clipper 11-12 Round the World Yacht Race, Visit Finland has denied the home favourite Gold Coast Australia their sixth consecutive victory and a coveted homeport win.

The Finns crossed the Race 6 finish line just after sunrise at 0444 local time today (1844 UTC Monday) with the sun glinting off the distinctive high-rise skyline. They were just six minutes ahead of Gold Coast Australia at the end of the 1300nm race.

Olly Osborne, skipper of Visit Finland said, "This is our first podium top spot and we've been on the heels of Gold Coast Australia for a long time.

“It feels fantastic, it really does. We've been wanting to get there for so long. Bit of a shame it had to be her homeport — I feel a bit mean about that, but that's the brief and you've got to do your best, haven't you," he said.

The people who take part in the Clipper Race come from all walks of life and between them represent more than 40 different nationalities. They have one aim in common — to take on the challenge of a lifetime, a 40,000nm circumnavigation under sail.

Chichester yachtsman Osborne continued, "The team is pretty ecstatic — the guys are over the moon. They really gave a hearty cheer when we crossed the line because they didn't know either until the last half hour how it was going to pan out."

For Tasmanian skipper Richard Hewson and the crew of Gold Coast Australia, the arrival in their homeport is bitter sweet. The warmth of the welcome, as Southport Yacht Club members, family and friends applauded them up the pontoon to the club house where breakfast awaited them, countered by the disappointment of such a narrow defeat to Visit Finland.

"Everyone did their best and the crew worked really hard,” said Hewson. “They sailed to the best of their ability, pushed themselves beyond the point they would normally push themselves in everyday life and that's all I can ask for.
I had a really good time, racing among all the other yachts."

The record of six consecutive victories in a single edition of the race, which is now in its 15th year, has stood since Clipper 98.

"We didn't get Alex Thomson's record this time, which I was really gunning for, but hey, there's still another nine races to go so maybe we'll get nine in a row, who knows," said Hewson.

De Lage Landen finished third, one hour and nine minutes after the Australian team and while Gold Coast Australia and Visit Finland consolidate their first and second positions respectively at the top of the overall leader board, the Dutch team's result is enough to lift them back to third place.

"It was amazing racing the last three days,” said skipper Stuart Jackson, as his team crossed the line at 0559 local time on Tuesday (1959 UTC Monday).

“We've been neck and neck with Visit Finland and Gold Coast Australia was sneaking up and just pipped us to the post.

"Last night, we could see the other boats, we turned a little bit too early and ended up in slightly lighter winds for a little bit longer than the other guys and just lost those crucial few miles," he said.

Jackson is full of praise for his crew, and acknowledges the skill of the other two teams. "The crew sailed an amazing race, they worked so hard, I'm really proud of them,” he said. “Visit Finland and Gold Coast Australia did a cracking job.”

Shortly behind the Dutch entry was Welcome to Yorkshire, who crossed the finish line at 0852 local time (2252 UTC Monday).

"A very different experience and a very positive result for us," said skipper Rupert Dean.

"In previous races, we hadn't performed as well as we'd wanted to but what a tactical race! That race up the New Zealand coast, tacking in and out of the bays, and then coming across the Tasman Sea there were squalls all over the place, and to play those two depressions as we did we were very pleased to have caught the shifts before the others.

"It is a great sense of achievement. It's only a relatively short race at 1300 miles but it's still a major achievement with all the crew onboard," he said.

The sprint from Tauranga, New Zealand, allowed many of the fleet to be within sight of their nearest rivals for much of the nine-day race.

During an action packed day of arrivals at Southport Yacht Club, Chinese entry Qingdao was next to cross the finish line, doing so at 1336 local time (0336 UTC) and securing sixth place.

"I think we've occupied pretty much every position on the leader board on the way here," explains Ian Conchie, skipper of Qingdao.

"It was a close race. Welcome to Yorkshire managed to come within five metres of us at one point, which was quite interesting, but what an amazing race,” said Conchie. “It has been tussling with different boats all the way here. We've had just about every weather condition and I think we've done more sail changes on the way here than we did in the whole leg across from Geraldton to New Zealand."

"It was a good. Our race-winning strategy of sailing offshore 50 miles while the skipper slept seems to have done well,” said Conchie, after his team claimed seventh place.

“It gave everyone the motivation to get moving. We found ourselves in the right weather so took full advantage of that and pushed really hard all the way.

"We got into some nice winds, had the spinnaker up and were really pushing it, maybe harder than we would have done if we'd been closer to the rest of the boats but it has all paid-off in the end," he said.

With the 10-strong fleet tightly packed for the majority of the 1300nm race, positions constantly changed, forcing skippers to make difficult tactical decisions.

"We decided we didn't want to come in third or fourth, we wanted to win it and the only way we were going to do this was to take a big tactical gamble," explained New York skipper Gareth Glover.

"Unfortunately our gamble didn't work out for us,” said Glover.

“We knew we were in a strong position but I really think we could have held that position to the end but it wasn't what we wanted, we wanted a podium position and we wanted to win this race. Sometimes you make a decision like that and it goes for you and sometimes against.

"The guys worked extremely hard and put in 110 per cent," he said.

Fresh from an impressive performance in the final stages of Race 5, Geraldton Western Australia had to settle for ninth place in the race to Gold Coast.

"We had a brilliant start but took a bit of a beating on the first night. We got our act together going around the top of New Zealand. We should maybe have gone south with the rest of the fleet but it was a bit of a gamble, looking at the synoptics. But they say you make your bed you lie in it so that's exactly what we've done, tried to make the best of the situation we had and unfortunately got second from the back.

"The crew have done really well; they put in every last little ounce of effort. I'm really excited to be in the Gold Coast and excited to see the sights and sounds," he said.

Perhaps disappointed to finish tenth but pleased with his crew's overall performance during the race was Derry-Londonderry skipper Mark Light.

"It was a very strange race; we had all sorts of different weather which changed very quickly,” said Light.

“We actually raced really well, I know we came in tenth but I'm not too disappointed because the attitude onboard and the way we raced was very good.

"There's not a lot between any of the boats. We all arrived on the same day, it must have been a great finish between Visit Finland and Gold Coast Australia and I'm pretty happy thinking we did what we could do in this one," he said.

Gold Coast City Council Mayor, Ron Clarke, was at the marina to welcome the teams and said, "The Gold Coast is a dynamic city and we're thrilled to host a dynamic event such as the Clipper Round the World Yacht Race.

"During the stopover we're excited to showcase our diverse industries. For instance, the crewmembers in the Clipper fleet will receive firsthand experience of our innovative marine industry when the boats undergo maintenance at the Gold Coast Marine Precinct.

"We are a city that excels in business through our Investment Attraction Program and incentive fund which assists eligible companies from export-focused and knowledge-based industry sectors,'' he said.

This is the first time the Clipper Round the World Yacht Race has visited the Gold Coast since its inception in 1996. During the stopover organisers have met with local businesses and government representatives to strengthen links with the region and demonstrate how partners use the event as a global platform to promote trade, tourism, culture and social inclusion.

Each yacht is sponsored by an international city, region, country or company, with many visiting the Gold Coast to host events and engage with local businesses, trade contacts and media.

The crews have play rather than work on their minds and after the mini-refit at The Boat Works, where each yacht will be lifted, re-antifouled and checked below the waterline, they will have plenty of time to enjoy all the Gold Coast has to offer.

In a packed programme of activities the crews will enjoy visits to Currumbin Wildlife Sanctuary, take helicopter flights over the coast, have paddleboard lessons with ten-time champion Jamie Mitchell, and enjoy lunch at Oskars Restaurant at Burleigh Heads. All of the teams have been 'adopted' by local Surf Life Saving Clubs and restaurants which have provided welcome hampers for each one.

Many friends and family have flown in for the stopover and, as Gold Coast is one of the major crew changeover ports, with approximately 50 people leaving the race and the same number arriving to join their boat, a large proportion of the visitors will enjoy extended holidays on the Gold Coast and the surrounding area.

The fleet will set sail for Singapore in Race 7 of the 15-race series on Christmas Eve. All 10 yachts will sail in formation along Main Beach in a Parade of Sail from the Gold Coast Seaway to Southport SLSC before the race start, which will take place at 11.30am on December 24.

Photo:
Visit Finland has denied Gold Coast Australia the homeport win that would have equalled the record for consecutive stage victories in the Clipper Round the World Yacht Race, crossing the Race 6 finish line on the Gold Coast just six minutes ahead of the Australian team.