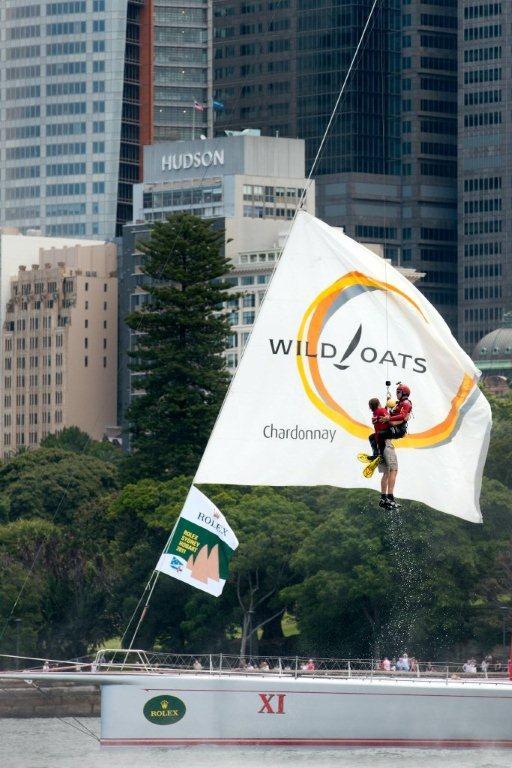 has completed her preparations for the big race with a spectacular helicopter rescue exercise on Sydney Harbour yesterday.

The operation, conducted in association with the Westpac Life Saver Rescue Helicopter Service (Southern Region), was structured around a simulated rescue of a crewmember from the yacht. With the helicopter hovering overhead a paramedic was lowered into the water alongside Wild Oats XI, which was located just off Sydney Opera House, so the crewman could be retrieved then winched to safety.

Wild Oats XI’s owner, Australian winemaker Bob Oatley, was keen for today’s exercise to take place following the capsize of the similar-sized supermaxi Rambler 100, while racing off the coast of Ireland last August.

“The safety of the crew comes ahead of everything else in ocean racing, but even more so in the Rolex Sydney Hobart Race,” said Oatley. “You can leave nothing to chance.

“It was important for me to know that Wild Oats XI will go to the race start on Boxing Day better prepared than ever before, and with the successful completion of today’s exercise, that has been achieved.

“We thank the Westpac helicopter rescue people for their excellent briefing of the crew today and subsequent demonstration of a rescue,” he said.

The chief pilot from the Westpac Life Saver Rescue Helicopter Service, Peter Yates, confirmed that the operation also had direct benefits for the organisation: “Today’s exercise was extremely valuable for us as it provided a unique opportunity to accurately assess a rescue situation from a large yacht in real time. That’s something we’ve not been able to do previously.

“Also, both sides will benefit from a debrief we will have, but most importantly, the DVD that is being produced using vision from today will simply help make the sport even safer.”

The demonstration was also assisted by the organisers of the Rolex Sydney Hobart, the Cruising Yacht Club of Australia.