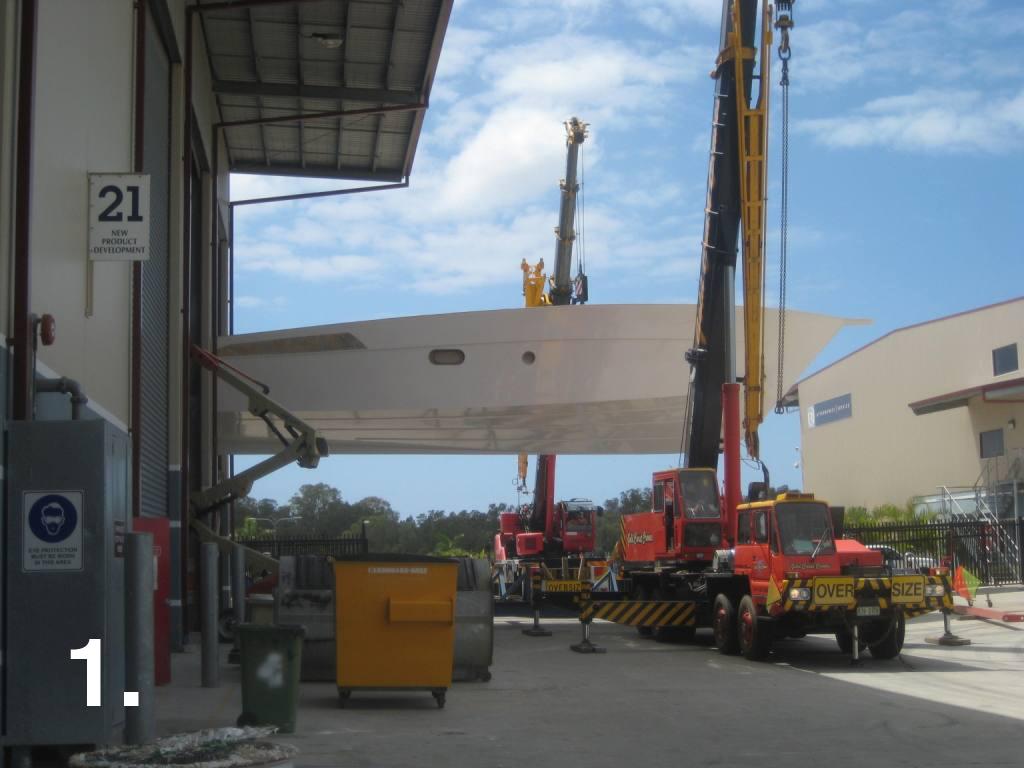 Riviera has recorded its biggest hull release, calling in two high-capacity cranes to lift the new 75 Enclosed Flybridge hull from the mould. It now moves into the next stage of production, Fit Out One.

Riviera’s 75 EF project manager Paul Wrench said boat hulls were usually lifted from the mould using the company’s onsite overhead gantry cranes but because of the height restrictions within the building, the 75 was lifted using 30- and 50-tonne cranes.

“We had to use these cranes to get into the shed, not because it’s an 80-tonne boat, but because it was a very tight situation and we had to get the cranes under the roof and through the roller doors making it a challenging lift but it was successful,” said Wrench.

“We then pushed it into the adjacent building, where we have begun installing engines, all the electrical components, the looms in the forward bilge, plumbing and hydraulics.

“We will be joining the hull and deck later this month and expect to install the flybridge on December 7,” he said.

Wrench said it was great to see the finished hull after months of planning and mould modifications that began in August.

“It looks fantastic,” said Wrench. “It has a longer cockpit and the aft deck of the flybridge is quite large now allowing up to 12 people on the flybridge.

“The interior on this boat is teak as opposed to the popular cherry and the owner has had custom lounges made for the saloon.

“This particular boat has Twin Disc Express Joystick System (EJS), which controls the variable speed stern and bow thrusters as well as engine gearboxes from a joystick,” he said.

Wrench said the New Zealand owners had made several trips to Riviera’s Coomera facility and were impressed with the build progress.

“The build is going extremely well, I am very confident time-wise, the project is on track, (and) on schedule for our late April launch date,” said Wrench.

“The 75 will be on display at the 2012 Sanctuary Cove International Boat Show in May and will be the biggest boat Riviera has built in the company’s 30-year history.
After the show it will be shipped to Auckland,” he said.

Riviera says Wrench began his career in the marine industry 34 years ago as a shipwright for McConaghy Boats in Sydney where he spent 17 years building America’s Cup yachts.
He is now Riviera’s large-boat project manager having worked on the six 70 Flybridges previously built and now the company’s new flagship model, the 75 Flybridge.

2). The new 75 Enclosed Flybridge hull is the largest ever built at the Riviera facility.

3). The 75 Enclosed Flybridge is now in the next stage of production, Fit Out One.