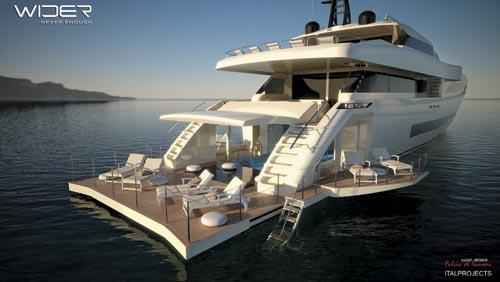 With the innovative 12.9m Wider 42 (see TAB415 for more details) now on the water and doing the boat show rounds, it seemed only a matter of time before the company — the brainchild of former Pershing boss Tilli Antonelli —released details of further additions to the range. And so it was at the end of September that scant details emerged of a 10-metre model.

I say scant, as this smaller version of the sportsboat-with-extending-wings comes as part of package that includes its own dock and garage. Enter the Wider 150, a 45.7m superyacht concept again designed by Fulvio di Simoni, which aims to add similar Wider innovation to a vessel on a whole new scale.

The essence of this efficient, composite-built semi-planing yacht comes at the aft end, where the baby 10m Wider tender nestles in its own stern garage. When it comes to launching, the tender has its own float-in, float-out aft dock, with the aft and side sections of the yacht folding out like a reverse origami structure to create a giant beach club, in the midst of which the tender dock becomes a large saltwater swimming pool.

The Wider 150 is proposed with a diesel-electric hybrid system that allows up to eight hours of autonomous running on batteries alone (with a range of 56nm), with a series of stepped diesel/electric combination modes giving a variety of speeds and ranges. A switch to full diesel-electric mode produces speeds of more than 20kts. Accommodation comes in the form of four guest suites plus an upper-deck master suite, and four crew cabins, while there is further garage space up forward for two more tenders and either two jetskis or a Tesla Roadster electric sportscar.

From a 12.9m prototype sportsboat to a 45.7m superyacht — that’s some leap. I can’t wait to see what they come up with next.

1). The tender does live in a float-in, float-out garage that doubles as a swimming pool when the stern opens out origami-like to create a mini beach club.

2). The proposed Wider 150 superyacht will derive its propulsion from a diesel-electric hybrid system.